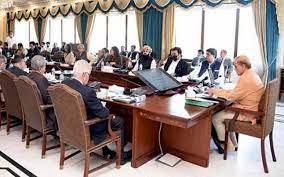 ISLAMABAD: The Federal Cabinet has decided to ban availing gifts from Toshakhana, a repository maintained by the Cabinet Division for the purpose of maintaining, preserving and storing the gifts given by the foreign countries to Pakistani leaders.

According to sources, as per the restriction no ruler is allowed to keep any Toshakhana gift as the Federal Cabinet also decided to public complete record of the Toshakhana.

The decision to make the Toshakhana record public was taken at a cabinet meeting held in Islamabad on Tuesday, with Prime Minister Shehbaz Sharif in the chair.

A report on the list of Toshkhana gifts was presented in the Cabinet and after deliberations it was decided to disclose its details to the public.

The Cabinet meeting also decided to introduce amendments to the Toshakhana policy.

The federal ministers were of the view that that the public should also know the reality of those who talked about honesty and principles.