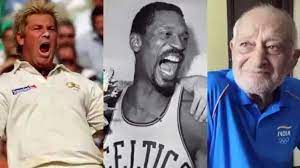 AFP Sport looks at their legacies as well as seven other high-profile sports stars to have died over the last year:

— He won a record 11 NBA crowns as a cornerstone of a Boston Celtics dynasty, overcame racism to become the league s first Black superstar and was a prominent civil rights activist.

He was the first Black coach to win the NBA Finals. That triumph came in 1968, especially poignant as it was just weeks after civil rights leader Martin Luther King s assassination.

“A good man and great American who did everything he could to deliver the promise of America for all Americans,” said US Presideent Joe Biden.

— “Earnie hit me so hard it shook my kinfolk in Africa,” remarked Muhammad Ali after their 1977 heavyweight world title bout which Ali won after 15 pulsating rounds.

One of 10 children, Shavers  family fled Alabama under threats from the Ku Klux Klan. He only took up boxing in his early 20s but his fearsome punch left not just Ali in awe.

“I was in the land of make-believe. I heard saxophones and trombones sounding in my ear… I saw little blue rats scamper out to smoke cigars, drink whisky, man,” said another opponent, James  Quick  Tillis.

— Regarded by many in sports-mad Australia as second only to Don Bradman, Warne mixed legendary cricket deeds with colourful headlines away from the pitch earning him the nickname  Hollywood  in a career as bewitching as his famed wrong  un.

Warne took 708 wickets in a 145-Test career. “I should think there have been a lot of great cricketers, great spinners and great leg-spinners but Warnie will always be, certainly from my point of view, the No. 1,” said Mike Gatting, who was at the wrong end of Warne s  ball of the century  in 1993.

— A flamboyant Australian wicketkeeper — nicknamed  Iron Gloves  — he made his international debut in 1970 against England before retiring in 1984 with what was then a world-record 355 Test dismissals, 95 off the bowling of Dennis Lillee.

He was no mean batsman either becoming the first Aussie wicketkeeper to score a Test century, against Pakistan in 1982.

— Played in all four World Cups in which Pele appeared (1958-70) but unlike the Brazilian legend never lifted the trophy. The closest he came was captaining the side that lost to England in the 1966 final.

Like his father, Seeler played for Hamburg from 1953 to 1972 where he is referred to fondly as  Uns Uwe  (Our Uwe) making 476 appearances.

“Uwe Seeler stands for everything that characterises a good person: Down-to-earthness, loyalty, joie de vivre, plus he was always approachable,” said Hamburg board member Jonas Boldt.

— The bespectacled coach shares with Buffalo Bills legendary coach Marv Levy and Minnesota Vikings  Bud Grant, the most visits to a Super Bowl without ever winning (four).

— For many the greatest jockey of all time. Known as the  Long Fellow , he rode a record nine Epsom Derby winners.

Piggott, who rode his first winner aged just 12, served a year in prison for tax fraud in 1987 and then made a shock return to riding.

He memorably reunited with Irish trainer Vincent O Brien to win the prestigious Breeders  Cup Mile on Royal Academy at the age of 54 in 1990.

“Lester walked about with an aura about him,” said his great rival Willie Carson.

— Considered to be the finest fly-half to play for Wales, pivotal to the country s glory years during the 1970s who became a cult figure due to a grievance-laced pre-match speech before facing England, the old enemy, in Cardiff in 1977.

“Look what these bastards have done to Wales. They ve taken our coal, our water, our steel. They buy our homes and live in them for a fortnight every year. What have they given us?” he said.

“Absolutely nothing. We ve been exploited, raped, controlled and punished by the English – and that s who you are playing this afternoon,” said Bennett. Wales won 14-9.

— Affectionately known as  Inga the winger  to fans of both rugby union and rugby league, he played for the All Blacks in union and Samoa in both codes. He was also a member of the Wigan side that dominated rugby league in the 1990s.

— Legendary coach who helped develop superstars such as Andre Agassi and Maria Sharapova.

The demanding routine for children and adolescents living and training at the Korean War veteran s academy produced results but also drew criticism.

“I hated it at Bollettieri s academy,” said Agassi. “The only way I could get out was to succeed.”

Bollettieri, though, remained unrepentant. “I did what had to be done. Tennis is not a sport for choirboys.”