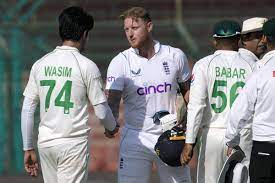 KARACHI: Winning a Test series with a clean sweep is “something to be proud of” for the England captain Ben stokes especially as he mentioned in “sub-continental conditions”.

Speaking to media after the historic win, Stokes said, “Coming into subcontinental conditions and having to think about the game differently compared to playing in England, trying a few different things that haven t been tried before, assessing conditions, to be a bit out there and to see them work, they won t always work but everything we ve tried has come off. I ve learned a lot in terms of the tactical side — that s the best thing to come out of it.”

“Particularly this game [Karachi Test], it was losing the toss and having to bowl first. We know how important the toss can be in the subcontinent, being under a different type of pressure — having to bowl a team out and then bat with runs on the board that was different to the first two games. But the most impressive thing was that we stuck to how we played. The way in which we managed to apply ourselves under different pressure from the toss, was very pleasing. To bat last on a sub-continent wicket was very good,” he added.

The Englishman mentioned that it is important to let the “lads” feel that the only pressure that comes in the game is what they have to deal with, it s not putting more on them.

Stokes praised his teammates and said that every member of the squad has contributed to England’s win.

“Being out in the subcontinent is one of the hardest places to do it. They’ve been amazing as well. Just a great place to be at the moment for a team, where everyone wants everyone to succeed, and everyone understands their position in the team, even if they’re not playing. It’s been a great team effort to come here and win 3-0, very pleasing,” the England captain said.

The skipper also praised the young debutant Rehan Ahmed and said that having someone like the 18-year-old is a great sign for English cricket.

“That spell last night, the more he got into it, he was coming to me more often about field placings and changes to the field to try to get them to play certain shots. Saud s wicket, for example, he was the one who brought up the deep square for the sweep, because he said if he top-edges it, it’s going to go straight to him, and then two balls later it did,” Stokes said.

“For an 18-year-old to come into his first Test match and have such a cricket-savvy brain, especially under Test-match pressure, was really good for us. And obviously, we got a sniff of what he can do with the bat as well. A very talented young man and I think just let him progress,” he added.

The England captain added that the first Test pitch in Rawalpindi was very flat and he just said enjoy the flatness boys, let’s just enjoy this challenge and see what we can do.

“It is a great time to be in this dressing room and a great time to be playing for England. I’m just encouraging everyone to turn up every day and enjoy what they re doing. Obviously, it is easier to do when we are winning the way we are at the moment,” he concluded.