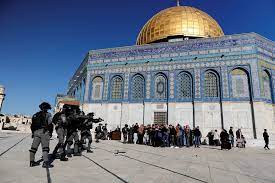 RIYADH: The Organization of Islamic Cooperation and other organisation of Muslim countries have strongly condemned the visit of Israeli national security minister to Jerusalem s Al-Aqsa Mosque compound.

The OIC described the visit of Israeli minister to Al-Aqsa Mosque compound a provocation to the feelings of all Muslims and a flagrant violation of relevant international resolutions.

In a statement, Saudi Foreign Ministry termed it a provocative action by the Israeli official. The statement renewed Saudi Arabia’s firm position to stand alongside Palestinian people and to support all efforts aimed at ending the Israeli occupation of Palestine.

On the other hand, United Arab Emirates and China have asked the UN Security Council to meet over recent developments at Al Aqsa mosque in Jerusalem.

Meanwhile, Arab League Secretary-General Ahmed Aboul Gheit condemned, in the strongest terms, the intrusion of an official of the new Israeli government to Al-Aqsa Mosque under the protection of its security services, considering it as an aggression against the first Qiblah for Muslims.

Aboul Gheit said in a statement that this blatant intrusion comes in the context of the beginning of the implementation of Benjamin Netanyahu s government of its extremist program and settlement agenda, with all the possibilities that this program entails of igniting the situation in Al-Quds (Jerusalem) and the rest of the occupied territories in a very dangerous manner, Saudi state-run SPA reorted.

Dr. Nayef Falah Al-Hajraf, Secretary General of the Gulf Cooperation Council (GCC), condemned the provocative practices carried out by an Israeli official by storming the courtyard of Al Aqsa Mosque.

The GCC Secretary General expressed his regret for the practices of the Israeli occupation authorities that undermine international peace efforts and contradict international principles and norms in respect of religious sanctities.