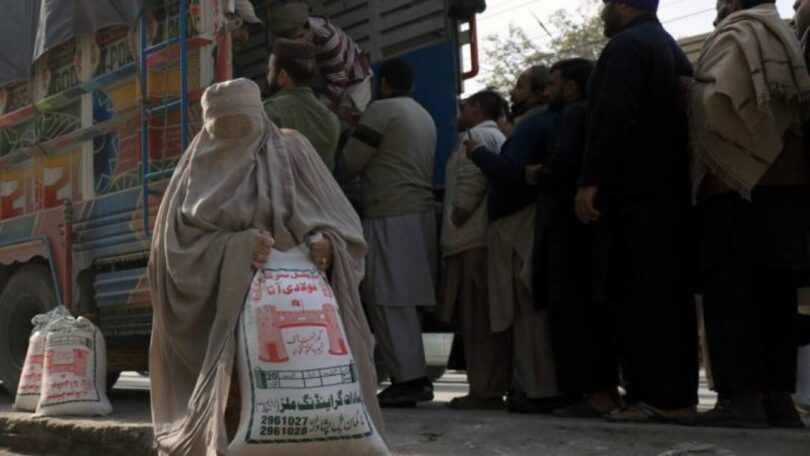 F.P. Report
KARACHI: All records of flour prices were broken as a 20 kg bag of flour reached Rs3,000 for the first time in the history of Pakistan. According to a report, the citizens of Karachi are forced to buy the most expensive flour in the country.
As per the report of the Bureau of Statistics, flour is being sold for up to Rs150 per kilogram in Karachi as a 20 kg bag of flour has become more expensive by Rs400 in a recent week in Karachi. The statistics of the government showed that a 20 kg bag of flour in Hyderabad reached Rs2,880, Quetta Rs2,700, Sukkur Rs2,700, and Peshawar Rs2,650. The price of a bag of flour in Khuzdar is up to Rs2,400 and in Larkana Rs2,600 per kg. A bag of flour is up to Rs1,295 in all major cities of Punjab including Lahore and Islamabad.
The prices of flour reached an all-time high in several cities of Pakistan as the flour crisis worsens. According to details, the prices of flour touched record highs, selling at Rs. 150 per kg in Lahore, Sukkur, and Peshawar due to the worse flour crisis due to the shortage of wheat in Punjab.
In the past twenty-four hours, the flour price has increased by Rs. 20 per kg, forcing citizens to stand in long queues at designated utility stores to buy subsidised flour. The price of flour In Faisalabad has become Rs 145 per kg after the raise of Rs 20 per kg, however in Lahore, flour is selling at Rs 150, similarly, in Sukkur Rs 125 per kg, and the cost per kg flour in Karachi is between Rs 150 to 160 per kg.
Due to the suspension of wheat supply from Punjab, the price of a 20 kg bag of flour in Peshawar has increased to Rs 3,000. Despite the wheat price fixed at Rs 3,000 per maund, the Punjab government supplied wheat to flour mills at Rs 2,200 per maund. In Multan, a government-subsidised flour bag of 10 kg is being sold at Rs 648, similarly, a 20 kg flour bag is being sold at Rs 1,295, while the price of a 15 kg bag of fine flour has increased from Rs 1,800 to Rs 2,000.
On the other hand, the Sindh government is taking measures to ensure the availability of flour across the province. Sindh Chief Minister Murad Ali Shah presided over the meeting of the Sindh Cabinet and approved to buy of 300,000 tons of wheat from Pakistan Agriculture Storage and Services Corporation Limited (PASCO). The Chief Minister directed to start the preparation of wheat purchase from February, the stock of 300,000 tons of wheat purchase will be completed till the sowing of the new wheat crop.
Flour shortage continues in Balochistan, as the 20kg price of flour has reached Rs 2,800 on Friday. As per details, the prices of flour have skyrocketed in Quetta and other parts of Balochistan while the commodity was not available in most shops across the province. The 20kg flour bag is being sold for Rs 2,800 now, which was Rs 2,300, a week ago in the province. Flour shortage has also hit the Quetta utility stores despite the government’s subsidized flour scheme.
The flour mills association said that 25 thousand bags are required for 18 flour mills daily in Quetta. They urged the government to arrange 9 to 10 lac four bags on daily basis. The mills associations further said flour will disappear from the market in few days, if wheat was not provided to them.
On other hand, the sources within the Balochistan food department, they have struck a deal of 200,000 wheat sacks from Pakistan Agricultural Storage & Services Corporation (PASSCO). The wheat will reach Quetta from Layyah tomorrow, they further said. Earlier, a massive flour shortage hit the Quetta utility stores despite the government’s subsidized flour scheme. 1-kilo bag of flour is sold at Rs130 which was previously available at Rs125 in the province. Whereas the 20 kg is sold for Rs 2500, the 50 kg bag is raised from Rs 6000 to Rs 6500. The 100 kg large bag now cost Rs 12000.