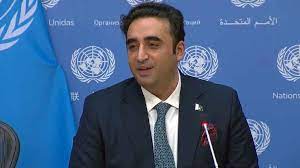 ISLAMABAD: Minister for Foreign Affairs Bilawal Bhutto Zardari Friday expressed hope that negotiations and diplomacy would be initiated for resolving the issue of Ukraine.

While taking part in a dialogue on security and coordination in the present geopolitical situation in Davos, Switzerland at the World Economic Forum, he said the sole solution to the Ukraine-Russia conflict was diplomacy and positive thinking should be adopted for the resolution of conflicts in the region.

The minister said the world was faced with many challenges including climate change.

Pakistan was facing the challenges of food and energy security, he said adding economies of the third world were encountering pressures.

Prices of gas were increasing across the world including Pakistan and the United States and the war of Russia and Ukraine had impacted the region and the world, Bilawal observed.

He said the world should resolve its issues with mutual cooperation.

He said the working of international financial institutions should be reformed and improved for removing reservations of the countries in the south.

He said conflicts and issues like climate change should be resolved at the platform of international institutions.

He said the conflicts endangering world peace could be resolved amicably if the international institutions started working within the framework of the United Nations.

The minister said it was unfortunate that the United Nations resolutions on Ukraine were very important for Europe and the west but the resolutions on Kashmir were not given importance.

Talking about climate change, he said the world should come together to tackle issues arising due to the adverse impact of climate change.

He said the issues concerning Afghanistan should be resolved through negotiations, adding, “We have already wasted so much time.”

He reminded that the Taliban were ready to lay down their arms and hold negotiations in 2002 but the offer was not taken seriously and then ultimately talks were held in 2022.