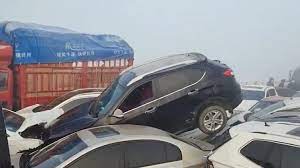 BEIJING (Reuters): Dozens of vehicles crashed in major car pileup on a bridge in the central Chinese city of Zhengzhou in Henan province because of extremely foggy conditions on Wednesday morning, state media CCTV reported.

Several cars and trucks could been seen crumpled and piled on top of each other on the Zhengxin Huanghe bridge in pictures and videos on social media. One car was dramatically jack-knifed in the middle of a pileup in a snapshot from CCTV footage.

Many people were injured and trapped at the scene of the accident and the fire department was on the bridge, according to CCTV.

Preliminary estimates from rescuers at the scene are that the pileup involved more than 200 vehicles and the injured were sent to the hospital for treatment, according to local television.

There were no further details regarding casualties or reported injuries.

Visibility in multiple areas, including Zhengzhou, was less than 500 meters (1,640 feet), and 200 meters in some areas this morning, according to the local meteorological service.

The local fire department immediately dispatched 11 fire trucks and 66 fire rescue personnel to the scene, according to state media.

Multiple collisions occurred on the north-to-south and south-to-north directions near the middle line of the Zhengxin Huanghe Bridge, CCTV reported.

Local traffic police had issued a notice banning all vehicles from passing the bridge because of foggy weather two hours ago, according to a statement issued by the Zhengzhou traffic authorities.

The Zhengxin Huanghe Bridge is a major overpass across the Yellow River, connecting Zhengzhou and neighboring Xinxiang.

A video of about 42 seconds on China’s Twitter-like Weibo platform showed rows of cars and trucks in various states of damage with people meandering on the bridge taking videos and pictures.

One driver who seems to be the person filming says, “this is too scary. Full of people here. I don’t think we can get off the bridge.”