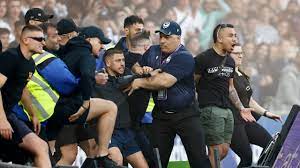 The governing body hit two fans with lifetime bans earlier in the week and on Thursday dished out suspensions ranging from five to 20 years to the eight fans over the incident during the A-League game between Melbourne City and Melbourne Victory.

“Football is the beautiful game, it brings together people like no other sport can, and we will not let the actions of these non-football fans cast a dark cloud over the game we love,” Football Australia Chief Executive James Johnson said in a statement.

“Football Australia will continue to work with Victoria Police and the venue to identify other guilty parties and rid our game of such people.”

More than 100 fans stormed onto the pitch during the game at Melbourne Rectangular Stadium, injuring several people, including City goalkeeper Tom Glover and referee Alex King.