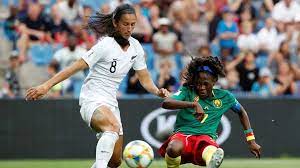 AUCKLAND (Reuters): Former New Zealand captain Abby Erceg has retired from international soccer and will not represent her country when the Football Ferns co-host the Women’s World Cup in July, coach Jitka Klimkova said on Friday.

Klimkova confirmed the 33-year-old would no longer represent New Zealand when she named her squad for a pair of friendlies against World Cup holders the United States later this month.

“She wants to focus now on her club and be with her club fully,” Klimkova said.

“Everybody’s journey is different and if that’s the way she wants to approach her football, we understand and we have to move on. That’s the way it is.”

Erceg has played 146 times for New Zealand during a 16-year career but has not been part of the squad since February, and Klimkova does not expect the defender to reverse her decision before the World Cup.

“That chapter is behind us,” Klimkova said. “I am not going through thinking ‘what if?’. I am very respectful of her decision and I am sure she is still going to be part of our family.

“I thank her for everything she has done for the Ferns, for New Zealand – having more than 100 caps speaks for itself.

“I’m thankful for what she has done in the past, but now we need to move on.”

New Zealand will take on the United States on Jan. 18 and Jan. 21 in Wellington and Auckland respectively as part of their preparations for the World Cup.

New Zealand has been drawn to face Norway, the Philippines and Switzerland in the group phase, which will begin on July 20.