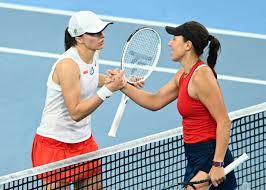 SYDNEY (AFP): Iga Swiatek was left in tears after Jessica Pegula stunned the world number one on Friday to give the United States a 1-0 lead over Poland in the semi-finals of the inaugural United Cup.

Less than two weeks before the Australian Open, Swiatek had no answers to the American’s powerful serve and searing returns, crashing 6-2, 6-2 to a deflating 71-minute defeat in Sydney.

“I played her a lot in a lot of different conditions but I felt these were definitely the fastest conditions,” said Pegula, ranked three in the world.

“I thought I did a really good job playing aggressive, serving smart and returning really well.”

With the roof closed at Ken Rosewall Arena on a rainy day in Sydney, Swiatek lost the opening seven points to be broken and go 40-0 down in the next.

She woke up to level at 1-1, but lost focus again and was broken twice more to concede the first set in 39 minutes.

Another early break for Pegula in the second set put Swiatek on the back foot again and she had no way back against a player in scintillating form.

It was a massive blow for Swiatek ahead of the Australian Open after coming into the match as favourite following a dominant 2022 in which she beat Pegula four times, including at the French and US Opens that she went on to win.

Men’s world number 19 Frances Tiafoe takes on 26th-ranked Pole Daniel Michalski next to try and extend the US lead.

The teams tournament began with 18 countries but has been whittled down to four after round-robin ties over six days in Perth, Brisbane and Sydney.

Poland, USA and Greece all progressed to the last four as city winners, along with “lucky losers” Italy.