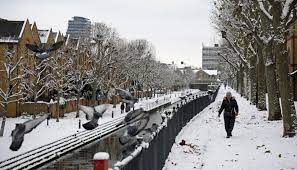 LONDON (AFP): Four children were fighting for their lives on Monday, after being pulled from an icy lake as an Arctic blast sent temperatures tumbling across the UK.

The youngsters were reported to have been playing on frozen ice near Birmingham, central England, on Sunday afternoon, when it gave way and they fell in.

Emergency services said the children went into cardiac arrest when they were rescued and were taken to hospital in a critical condition.

The incident came as the UK was hit by heavy snow and freezing conditions, causing major travel disruption, on the eve of a national rail strike Tuesday that was already expected to bring the country to a grinding halt.

“Our runway is temporarily closed whilst we undertake snow clearing,” it added, with many flights cancelled early Monday.

The airport is a main hub of budget airline Ryanair, which also cautioned about disruption to its flights at Gatwick, south of London.

“Due to ongoing severe snowy weather across the UK, runaways at both Stansted and Gatwick have been temporarily closed tonight (11 December),  disrupting all flights scheduled to depart Stansted/Gatwick during this temporary closure period,” it said.

Both airports were open on Monday, but passengers were told to brace for delays.

More than 50 flights were also cancelled on Sunday at Heathrow, the UK’s largest airport, due to freezing fog.

Train and bus services in London were also severely affected after the dump of around four inches (10 centimetres) of snow overnight, which also forced the closure of parts of the M25 orbital route around the capital, the country’s busiest motorway.

Some schools were also shut.

The UK has been experiencing a cold snap for several days, with temperatures dropping to -10 Celsius degrees (14 Fahrenheit) in some areas, although the Met Office said the temperatures were “not unusual for this time of year”.

The service has issued yellow alerts for snow, fog and frost in several areas, including southeast and southwest England, and the north of Scotland.