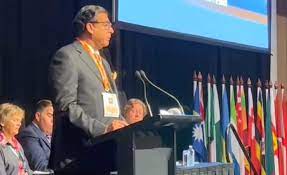 ISLAMABAD: National Assembly Speaker Raja Pervaiz Ashraf said on Thursday that the Parliaments have to be innovative for inventing new ways to resolve the challenges faced by nations.

Addressing the participants of 26th Conference of Speakers and Presiding officers of Commonwealth (CSPOC) on “Role of Speaker and Presiding Officer in Leading Parliamentary Innovations,” in Canberra Australia, he said, “the world is going through sweeping changes”. As representatives of the people, the onus of innovating new socio-cultural, socio-political and socio-economic order falls upon parliamentarians.

He said that the global upheaval caused by the Coronavirus pandemic called for a new working and social environment while the catastrophes brought by the steep climate change also desired a new approach to human living, said a message received here. He also drew the attention of participants to the economic upheavals and the consequent social and political unrests.

The Speaker said that “Democracy is ever evolving” adding that the journey of humanity’s pursuit for a more just, equitable and inclusive society saw the significant transition in the aftermath of the industrial revolution.

He said that meaningful participation of the common citizen in holding the government of the day accountable was the only guarantee against dictatorships as well as the power capture by the populist, fascist and extremist movements. He reminded that Shaheed Mohtarma Benazir Bhutto termed space between people and its Parliament as the “Democracy Deficit”, which must be addressed by Parliaments of World.

While talking about open, transparent, equitable and accessible Parliament the only solution to bridge the divide among the general public and the parliament.

The Speaker said that 1st 5-year National Assembly Strategic Plan (NASP) was introduced in 2008. This was reviewed and improved in light of our experiences in 2014 and the 3rd and present 5 year NASP was penned in 2019. Each has been backed by a definite Annual Work Plan and every Department of National Assembly was required to align its annual budgetary requirements to achieve the targets set in the Strategic Plan. The entire process was regularly monitored and evaluated through a specially created wing of Special Initiatives in the National Assembly, under which a Project Management Unit was entrusted to be the Secretariat of the NASP.

The Speaker said that in 2009, the Women’s Parliamentary Caucus, which was an across-the-board alliance of all women parliamentarians, has now become a global parliamentary brand, referred as a role-model by the 2010 Inter Parliamentary Union Report, CPA Publications and various UN Agencies.

The second step was the creation of a Special Parliamentary Task Force on Sustainable Development Goals in 2014 when Pakistan’s Parliament became the first-ever parliament to shift its development agenda from MDGs to SDGs. The efficiency and effectiveness of this group can be gauged from one example: In light of its targeted approach towards energy conservation. Pakistan’s Parliament became the first-ever 100 percent Green Parliament by installing a One Mega Watt Solar System.

The Parliamentary SDGs Secretariat was also instrumental during the recent devastating floods in Pakistan where the Parliament lead the international discourse in COP 27 at Sharam-Al Sheikh in making the world realize that Pakistan is the victim and not responsible for global environmental degradation.

Youth remains the driving force for any nation, aspiring for a secure and bright future. The Young Parliamentarians Forum, created in our Parliament was not only the bridge between the Youth and the Parliament but was also a useful. (APP)