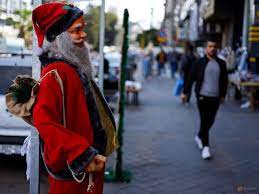 GAZA (Reuters): As pilgrims from around the world flock to Bethlehem, Jerusalem and Nazareth for Christmas, members of Gaza’s Christian community wait to hear whether Israel will grant them a travel permit.

This year, Israeli authorities have approved travel for nearly 600 Palestinian Christians in Gaza, according to COGAT, a unit in Israel’s defense ministry that coordinates civilian issues with Palestinians.

But Palestinians say Israel’s permit allocations deny many families a rare opportunity to leave the strip and travel together because permits are not always granted to all family members.

“It is a tragedy when the mother or the father gets a permit and not the children or the opposite. That means there is no travel and there is no celebration,” Suhail Tarazi, director of Gaza’s Young Men’s Christian Association (YMCA).

“Such suffering happens to many families and it is repeated every year,” Tarazi told Reuters during a tree-lighting celebration in Gaza City on Dec 10.

COGAT said the accusations were an “absolute lie” and that it had denied about 200 applications from Christians this year on security grounds.

Gaza’s 2.3 million population comprises an estimated 1,000 Christians, most of whom are Greek Orthodox who celebrate Christmas in January.

Gaza is run by the Islamist Hamas group. Citing security concerns, Israel restricts the movement of people and goods and maintains a naval blockade of the densely-populated coastal strip, where unemployment and poverty are high. Egypt also maintains some restrictions along its frontier with the territory.

“I got a permit, but neither my wife nor my son did, therefore, I won’t be able to travel and enjoy Christmas in Bethlehem, the birthplace of Jesus,” Majed Tarazi said. He is not related to Suhail, the YMCA director.

For journalist Samer Hanna, the situation is reversed. He has been denied permits for the last 15 years on security grounds, while his wife and two children can travel.

“They get upset when they go and I am not with them, and if they stay here because of me, they still wish they could go to the West Bank or Jerusalem,” Hanna said.

Even though Bethlehem is only a 90-minute drive away, the travel ban has prevented him from reconnecting with extended family and friends in the West Bank.

“It is a big problem when I see people from all over the world going to Bethlehem easily and I can’t travel with my family,” he said.