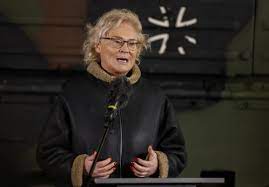 BERLIN (AFP): Germany’s Defence Minister Christine Lambrecht has decided to step down from her post, several major national media reported on Friday, after she came under fire over a series of gaffes.

The plan to resign came from Lambrecht herself, and not from the chancellery, said Bild daily, which first reported on the move without citing its sources.

Separately, Sueddeutsche daily said the minister, who is from Chancellor Olaf Scholz’s Social Democratic Party (SPD), is looking at stepping down in the coming week.

Rolling news channel NTV added that the search was on within the SPD for a replacement for the 57-year-old.

News media group RND had earlier reported that Lambrecht would host her US counterpart Lloyd Austin for talks on Thursday — a meeting that a German defence ministry spokesman would not confirm.

The pair were then due on Friday to join other defence ministers from Ukraine’s allies at the US air base in Ramstein to coordinate military aid for the conflict-hit country.

Lambrecht has come under heavy criticism in the last weeks over a video she posted on social media in which she reflected on a year ending with “war raging in the middle of Europe”.

To the backdrop of exploding fireworks during chaotic New Year’s celebrations in Berlin, Lambrecht said the war in Ukraine had led to “a lot of special experiences” and the chance for “many encounters with great and interesting people”.

Leading German media blasted the tone-deaf message, with some commentators saying she was “no longer tenable as a minister”.

Critics also questioned her ability to lead Europe’s biggest economy in reviving its long-neglected armed forces in the wake of the war in Ukraine.

Since Russia’s invasion of Ukraine, Lambrecht, along with Scholz, had been blasted over Germany’s stuttering response to the conflict.

The minister was mocked in January 2022 for her announcement that Germany would send 5,000 helmets to Kyiv, where the Ukrainian government was seeking heavy weapons to ward off Moscow.

Only 13 percent of the 5,000 people surveyed wanted her to keep her job.