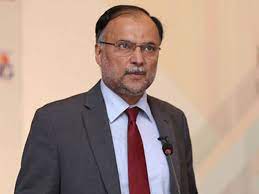 RAWALPINDI: Federal Minister for Planning, Development, and Special Initiatives Professor Ahsan Iqbal here on Friday said that the government was committed to ending terrorism in the country and the whole nation stood by their side.

Talking to the media, he said that resource-rich Pakistan was facing scores of challenges due to political instability, adding that economic stability could only be achieved through political stability.

Expressing concern over the worsening law and order situation in Khyber Pakhtunkhwa (KPK), he said the provincial government was not taking concrete steps. “The elements that had been eliminated are rising again,” he said.

“We had eradicated terrorism earlier and would root out the menace again,” he added. The government would not allow anyone to play with peace in Pakistan, Ahsan Iqbal said.

The KPK government gave another opportunity for the terrorist elements to rise again, he said.

“The government is working on the economy and rehabilitation of the people in flood-affected areas while Imran Khan is playing political games, Ahsan Iqbal said. “There is a need to stand united against the terrorists who are resurfacing,” he added. (APP)