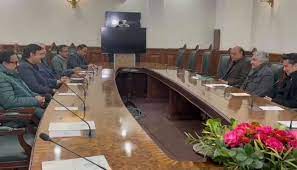 LAHORE (Agencies): The government and the opposition Friday remained at loggerheads over the appointment of Punjab’s caretaker chief minister, with the matter to now be taken by the Election Commission of Pakistan.

The parliamentary committee — formed a day earlier — comprising three members from both sides met in Lahore today to deliberate on the important appointment. The members, however, could not reach a consensus on the matter. The committee included Mian Aslam Iqbal, Raja Basharat, and Hashim Jawan Bakht from the government; whereas, Malik Muhammad Ahmed Khan, Hassan Murtaza, and Nadeem Kamran represented the opposition.

Pakistan Muslim League-Nawaz (PML-N) leader Malik, speaking to journalists after the meeting, said: “This was an opportunity to settle things politically, but that could not be done here.” “When there are so many polarised positions, there can be no agreement.” For his part, Murtaza confirmed the divide on the matter and said both sides could not agree on the appointment of the caretaker chief minister.

“It is a pity that we are leaving here without consensus,” he added. The Pakistan Peoples Party (PPP) leader also lamented the stalemate, saying, “when the house was small, the people were big; now the house has become big, while people have become small.” “Unfortunately we could not agree [on a name], we are not leaving with good memories,” he added.

It must be pointed out here that as per law, the parliamentary committee was formed under Article 224A of the constitution and comprises six lawmakers. The committee has three days to reach an accord over a name for the top spot in Punjab. In case of disagreement, the matter will be decided by the election commission, which must then settle on a caretaker CM in two days. PML-N committee member Malik said that if the committee fails to reach an agreement the matter of selection will go to the ECP and a decision will be made according to the constitution.

However, outgoing Punjab Chief Minister Parvez Elahi has already declared that if the decision-making power is left to the ECP, he will take the matter to the Supreme Court. Defending the PML-N nominee Ahad Cheema, Malik reiterated his faith in him and asked: “What was the decision given in the National Accountability Bureau (NAB) case against him? Didn’t Ahad build the metro in Pakistan and prove his mettle?” Ahad, known as the best administrator in the Shehbaz Sharif chief ministership, is also called the “Metro Man” among his close friends and political circles. However, he remained in NAB custody during Imran Khan’s tenure and was acquitted of the charge later.

“NAB was used for political revenge under Imran Khan,” Malik said. Malik also bolstered Mohsin Naqvi’s nomination and said that Mohsin had built his credibility by working for CNN. Moreover, the PML-N MPA criticised the nominees forwarded by PTI and pointed to Naseer Ahmad Khan’s dual citizenship as a reason that made him a less-than-ideal candidate.

“Parvez Ealhi has objections to the committee he himself has nominated,” he told reporters. “Now, the matter will be resolved under 224A.” He further criticised the PTI chief and said that “Imran Khan can have his politics if Saqib Nisar and Faiz Hameed are available.”