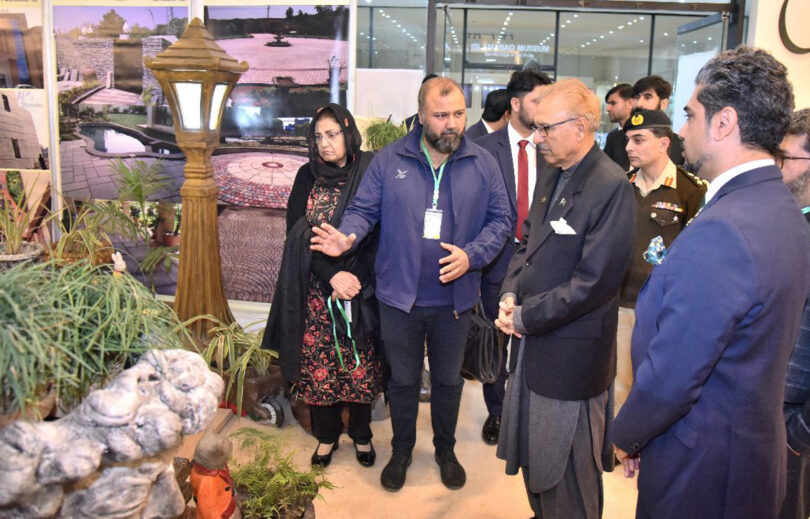 Earlier, the President also inaugurated the Building Materials. The President said that the discipline of architecture was important as it provided the basis for the construction industry and provided quality and aesthetically pleasing accommodations to the people. He said that the buildings should be designed with in-built mechanisms to make them differently-abled person friendly as well as by making rooftops usable by growing vegetables and greenery, besides installing solar panels to provide green and clean energy.

The President said that construction and development activities by the public sector contribute greatly in increasing economic activity and injecting liquidity into the system which further helped in the growth of industry and providing employment to the people. He quoted the examples of the Mughal dynasty and Sher Shah Suri who invested public money in developing roads, buildings, monuments, and other public places which greatly contributed to the prosperity of the Indo-Pak sub-continent.

The President said that the trend of parking money in buying plots and buildings prevented its circulation for promoting business, trade and investment, and contributed to slowing down the economic and financial activities in the country. He said that buildings and houses should be constructed with the underlying objective of providing decent and affordable living to all segments of society, including the poor and the underprivileged. He said that the use of black money for buying plots and buildings and investing in the construction sector should be checked and discouraged, besides systems should be strengthened to disallow the creation of black money at all.

The President said that it was surprising to note that almost $13 billion of Pakistani wealth had been blocked and invested in Cyber currency which was depriving the economy of much-needed liquidity. He said that in Pakistan, frequent amnesty schemes had been announced to bring black money into the formal economy but instead of offering such schemes, efficient systems should be developed to tax the wealthy and convert the entire informal economy into the formal economy which would help in overcoming the financial and economic difficulties.

The President said that water was a precious commodity and Pakistan was facing unpredictable fluctuations in the weather patterns, nonetheless, Pakistan received sufficient water through the weather system which needed to be preserved and efficiently utilized.

He proposed that all buildings should be designed to harness and preserve rainwater to recharge the aquifers. He said that only a limited volume of water should be allowed to be discharged into the sea as was necessary to protect mangroves and prevent the encroachment of sea into the land while the rest should be efficiently utilized. He also stressed the need to set up water purification and sewerage treatment plants in every industry to prevent the discharge of toxic chemicals, pollutants and waste into the sea as it was negatively affecting the marine flora and fauna.

The President further said that in Pakistan there was a trend to first encroach on state land, build on it unlawfully, and later through various means get it regularized. He said that this phenomenon should be stopped and discouraged to prevent these illegal constructions. Architect Saad Mehmood Khan, on the occasion, said that IAP had been very active in organizing events in different cities, including hosting conferences, symposia, workshops and lectures, and international architectural exhibitions, to sensitize the governments and the public on issues of environment, architectural education, sustainable building practices, building bye-laws, and city planning.