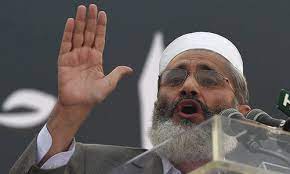 LOWER DIR: Jamaat-i-Islami chief Sirajul Haq has said the country does not need any other enemy in the existence of the Pakistan Democratic Movement and Pakistan Tehreek Insaf as they both were destroying the country with their ugly politics. He was addressing the party workers at Samarbagh as chief guest here on Saturday. The JI chief announced that his party would make no alliance with any party in the next general elections and would contest it with the party’s own symbol and agenda.

Sirajul Haq said that the troika (PML-N, PPP and PTI) had destroyed everything including the culture, civilization, social norms, politics and economy in the country. He said the nation no longer trusted them and were eyeing on other political parties.

Referring to inflation and flour shortage the JI chief said that people from Karachi to Chitral stood in long queues for hours just to get a 20 kg of flour bags. He said the international establishment had shortlisted the political parties to rule Pakistan. “These parties cannot form a government without the establishment in Pakistan and they always play in its hands”, he said, adding the voters were now aware of the situation and they would elect honest, sincere and Pakistan-made politicians.

About the Geneva pledges he said the rulers were expressing pleasure on getting loans for running the state affairs but it was a shame for the nation. “The prime minister shall tell us where the Rs 70 billion announced for the flood victims was spent”, he asked. The JI chief while speaking at a news conference at Dir Khas here the other day said that bad governance, incompetence and corruption of the rulers was the cause of political chaos, constitutional and economic crises in the country. He said the hoarders and the mafias were making billions of rupees as profit. “Mafias are present in all the three major parties PML-N, PPP and PTI”, he said, adding all these had created artificial crises of sugar, medicine and petrol in the past.

The JI chief strongly criticized the Sindh government’s decision to postpone the local body elections in Karachi and Hyderabad and said that the PPP and MQM were afraid of their defeat. “People of Karachi will never vote for extortionists and make the JI successful”, he said, adding that the PPP repeatedly postponed the local body elections due to the fear of the masses’ revenge. He praised the Election Commission’s decision to support the constitution and democracy and hold the elections on January 15.

About the Gawadar situation, Siraj said that despite having vast mineral reserves and coastline, the governments had kept the people of the province marginalized and cheated them. He said the sit-in for the rights of Gawadar was going on for the last 65 days but instead of negotiating with the protesters, the government adopted the path of violence and stubbornness. He said that the residents of Gawadar were protesting peacefully for their legitimate right which was their constitutional and democratic right. “We strongly condemn the cases and arrests against the protesters of “Gwadar Ko Haq Du Tehreek” and its leader, he said and demanded the government to immediately release all the arrested protesters.