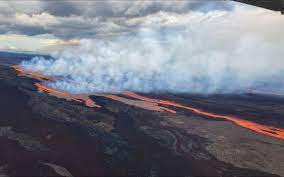 HAWAII (AFP): One of the world’s most active volcanoes has burst into life again in Hawaii, a month after it stopped erupting.

Fountains of lava spewed out of Kilauea, flooding the crater at its peak with molten rock.

Scientists at the US Geological Survey said the first stirrings were recorded on Thursday afternoon when occasionally intense sprays of lava gushed through the crater floor — the result of a month of pent-up energy.

By Friday morning they had calmed considerably.

“The high initial effusion rates are declining rapidly as lava stored within the magma system over the past month is erupted,” the USGS said.

“The fountains decreased in vigor overnight and are consistently about 5 meters (16 feet) high this morning.

“Lava flows have inundated much of the crater floor (which is nearly 300 acres or 120 hectares).”

The eruption comes a month after Kilauea and its bigger neighbor Mauna Loa went quiet.

Mauna Loa, the world’s biggest volcano, had put on a spectacular weeks-long show as it erupted for the first time in four decades, with lava fountains 60 meters high that sent rivers of molten rock down the flanks.

Kilauea is much smaller than Mauna Loa, but is far more active, and regularly wows helicopter-riding tourists who come to see its red-hot shows on Hawaii’s Big Island.

The current eruption poses no immediate danger to communities, the USGS said, although they warned that large volumes of volcanic gas — particularly sulphur dioxide — could have an effect.

“It will react in the atmosphere to create the visible haze known as vog (volcanic smog) that has been observed downwind of Kilauea,” the agency said.

“Vog creates the potential for airborne health hazards to residents and visitors, damages agricultural crops and other plants, and affects livestock. ”

Kilauea is one of six active volcanoes on the Hawaiian islands.