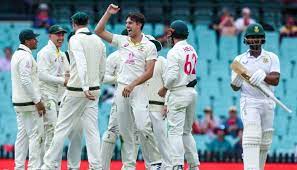 SYDNEY (AFP): Skipper Pat Cummins bowled Australia into contention to pull off a stunning victory with a fiery spell against South Africa in an absorbing third Sydney Test on Saturday.

Cummins captured three for 29 in a hostile 14 overs to set up the Australians for a dramatic final day charge for victory to complete a series clean sweep against the hapless Proteas.

At the close on day four, South Africa were batting for survival at 149 for six in reply to Australia’s 475 for four declared first innings with Marco Jansen on 10 and Simon Harmer six.

The outgunned South Africans have only passed 200 once so far in this series.

The Australians need 14 more wickets to pull off an astonishing victory despite so much time lost and cannot be counted out after rocking the tourists in Saturday’s two compelling sessions of the rain-marred Test.

“I’m pretty excited about tomorrow,” said spinner Nathan Lyon. “It’s going to be an exciting day’s cricket, we know what we have to do.”

Hazlewood, bowling a lively opening spell, got Elgar with a brutal short-pitched delivery which clipped his glove for a catch by wicketkeeper Alex Carey.

Lyon stunned Sarel Elwee who did not play a shot and was bowled top of off-stump for 18 leaving the tourists 37-2 in the 18th over.

Hazlewood broke through again after tea with an inswinger that kissed the edge of Temba Bavuma’s bat for Carey to do the rest.

Bavuma clouted two sixes off Lyon in his 35 off 74 balls but was a big wicket for the Aussies to leave the visitors 85-4 in the 39th over.

“Reverse swing is in play, with a little bit of variable bounce, the short ball is difficult to play because of how slow it is coming off the wicket,” Hazlewood said.

“I think Ash (Agar) and Gazza (Lyon), it’s a big day tomorrow for them with the ball spinning with lefties and righties for them both to work with, there will be plenty happening tomorrow.”

Cummins removed Khaya Zondo with a superb yorker that trapped him leg before wicket for 39 and South Africa’s fifth wicket.

The skipper charged in to lead the Australian bowling assault with two fearsome deliveries thudding into Marco Jansen’s upper body.

Cummins quickly got another wicket, with Kyle Verreynne edging to Steve Smith at slip for 19 for Smith’s 151st Test catch.

“We’ve just got to stick to our basics, that’s what we’ve done over the last 10 years or so .. thrilling day tomorrow, do the basics well and see how we go,” Lyon said.

Cummins’s decision to declare deprived opener Usman Khawaja of a first Test double century, with the elegant opener stranded on 195 not out.

The weather forecast is for improving conditions and Australia have potentially 98 more overs on Sunday’s final day to finish off the South Africans.

In the first Brisbane Test, the Proteas lost all 20 wickets in 86 overs and in Melbourne South Africa lasted 137.3 overs.

Australia are bidding for a series clean sweep to seal a place in the World Test Championship final in London in June.

Australia are 2-0 up in the series after winning the opening Test by a six-wicket rout in Brisbane inside two days, then hammering the Proteas by an innings and 182 runs in Melbourne.