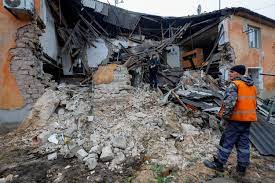 DONETSK (Reuters): Ukrainian forces staged their heaviest shelling attack in years in the country’s Russian-controlled east on Thursday, Moscow-installed officials said, as both sides ruled out a Christmas truce in the nearly 10-month-old war.

Alexei Kulemzin, the Russian-backed mayor of Donetsk city, said 40 rockets were fired from BM-21 Grad multiple rocket launchers at civilians in the city centre in the early hours.

Meanwhile Russian forces kept up shelling and air strikes along the entire eastern front line, killing one person, while two were killed in the southern city of Kherson, Ukrainian officials said.

Moscow and Kyiv are not currently engaged in talks to end Europe’s biggest conflict since World War Two, which is raging mainly in the east and south of Ukraine with little movement on either side.

“The Kremlin… is seeking to turn the conflict into a prolonged armed confrontation,” a senior Ukrainian officer, Brigadier General Oleksiy Gromov, told a news briefing on Thursday. He also dismissed the possibility of a truce over the festive period.

On Wednesday, Kremlin spokesman Dmitry Peskov had said a Christmas ceasefire was “not on the agenda”.

Kulemzin cast the Donetsk attack as a war crime and said it was the biggest on the city since 2014, when pro-Moscow separatists seized it from Kyiv’s control. Preliminary estimates showed five people had been hurt, including a child, he said.

There was no immediate Ukrainian response to his comments.

Ukraine’s military General Staff said in its daily report that Moscow’s focus remained on the eastern cities of Bakhmut and Avdiivka, adding that Ukrainian forces had repelled Russian attacks in the past 24 hours.

It also said Russian forces continued to strike Ukrainian troops and civilian infrastructure in the Donetsk region and in the southern areas of Zaporizhzhia and Kherson.

“The Russians fired at different areas along the entire front line all night and in the morning,” the Ukrainian governor of Donetsk region, Pavlo Kyrylenko, said on the Telegram messaging app, adding there had been two air strikes on Avdiivka.

One person was killed and four injured near Bakhmut, he said, adding: “It is dangerous to stay in the Donetsk region! Evacuate in time!”

Reuters was unable to immediately verify battlefield accounts from either side.

“There is no calm on the front line,” Ukraine’s President Volodymyr Zelenskiy said in a Wednesday video address, saying Russian artillery attacks on towns in the east had left “only bare ruins and craters”.

He said this week that Russia should start withdrawing by Christmas as a step to end the conflict, but Moscow rejected the proposal, saying Ukraine must first accept the loss of territory.

The United Nations’ High Commissioner for Human Rights, Volker Turk said in a speech to the Rights Council following a visit to Ukraine that Russia’s strikes were exposing millions to “extreme hardship”.

On Wednesday, Kyiv suffered the first major drone attack in weeks. Two administrative buildings were hit, but air defences largely repelled the attack. Zelenskiy said 13 drones had been shot down.

In one snowy Kyiv district, residents said they heard the loud whirring engine of an Iranian Shahed drone followed by a powerful explosion at a building next to their homes.

“I want this all to be over … For (Russian President Vladimir) Putin, that bastard, to die,” said Yana, 39, who had been getting ready for work when the attack took place.

Tens of thousands of people have been killed, millions more displaced and cities reduced to rubble since Russia invaded Ukraine on Feb. 24 in a “special military operation”, saying it needed to protect Russian speakers from Ukrainian nationalists. Kyiv and its allies call it an unprovoked war of aggression.

National grid operator Ukrenergo said on Thursday Ukraine continued to suffer a “significant” deficit of electricity due to the strikes, including new ones in the east, adding that the situation was complicated by poor weather conditions.

In a move that would significantly bolster Ukraine’s air defence, U.S. officials told Reuters that a decision on providing the Patriot missile system to the Ukrainian military could be announced as soon as Thursday.

The Kremlin said the United States was getting “deeper and deeper into the conflict in the post-Soviet republic”, and that U.S. Patriot systems would be legitimate targets, something that Russia’s foreign ministry said on Thursday applied to all weapons supplied to Ukraine by the West.

European Union member states failed to agree on a ninth package of Russia sanctions in talks late on Wednesday, diplomats said, after Poland called for a tougher stance.

Member states disagree over whether the EU should make it easier for Russian fertiliser exports to pass through European ports to help poorer countries even if the fertiliser companies concerned are owned by blacklisted oligarchs.

Further financial and military aid to Ukraine will feature prominently on the agenda of EU leaders meeting in Brussels for a summit later on Thursday.