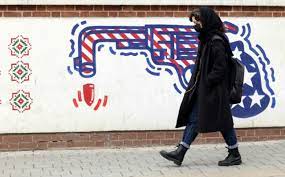 TEHRAN (AFP): Iran on Thursday accused the United States of orchestrating its removal from a UN women’s rights body over its response to protests triggered by death of Mahsa Amini.

The Islamic republic has seen waves of protests since the September 16 death in custody of Amini, a young Iranian Kurd who had been arrested for allegedly violating the country’s dress code for women.

Hundreds of people have been killed and thousands arrested in the street violence, leading to international condemnation and Iran’s removal Wednesday from the United Nations Commission on the Status of Women (UNCSW).

Iran pointed the finger of blame at the United States, saying the move was a result of its arch-foe’s concerted efforts and that it lacked “legal justification.”

“This one-sided action of the US… is an attempt to impose unilateral political demands and ignore electoral procedures in international institutions,” foreign ministry spokesman Nasser Kanani said.

“Removing a legal member of the commission is a political heresy which discredits this international organization and also creates a unilateral procedure for future abuses of international institutions,” he added.

Iran, which was elected to the body in April for a four-year term, was stripped of its membership with immediate effect.

A simple majority was needed to adopt the move, which was approved after 29 members of the UN Economic and Social Council (ECOSOC) voted in favor, eight countries including Russia and China voted against and 16 abstained.

The text of the UN resolution said the Iranian authorities “continuously undermine and increasingly suppress the human rights of women and girls, including the right to freedom of expression and opinion, often with the use of excessive force.”

The head of Iran’s high council for human rights, Kazem Gharibabadi, said the motive of the United States for supporting the resolution was to protect its own interests.

The US “only pursues its inhumane and anti-human rights interests and goals” by issuing “false and hypocritical statements and comments” against Iran, he said in a Twitter post.

Iran said on December 3 that more than 200 people had been killed in the unrest, including security personnel. Human rights groups based abroad say the country’s security forces have killed more than 450 people.

Iran has handed down 11 death sentences in connection with the protests. It has carried out two executions in the past week. Campaigners say a dozen other defendants face charges that could see them also receive the death penalty.