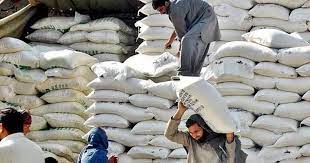 PESHAWAR (APP): The high prices of flour and bread in open markets here Thursday irked Peshawarties whom termed it failure of the provincial government to control its prices. The poor people, labourers, farmers and general public while expressing displeasure over the shooting prices of flour and bread in different areas of Peshawar City have complained that flour of the officially approved rate was being given on the basis of political affiliations while underprivileged were being deprived.
According to market survey, the price of 80KG flour bag was swelled to Rs12,000 and 20KG bag to Rs28,00 that irked the poor strata and under privileged segments of the society. Riaz Khan, a former school teacher told APP that the Provincial Government’s approved rate of the 20KG flour bag was fixed at Rs1350, which was being sold at Rs2800 in open market that was beyond purchasing power of common man.
He said the Provincial Government has paid a deaf ear on the shooting prices of flour in KP where ata dealers as well as flour mills owners were sucking blood of poor people on the pretext of shortage of supply of wheat from Punjab. As result, he said that the prices of bread was also increased at most areas of Peshawar including Chowk e Yadgar, Shoba Bazar, Qissa Khwani, Haji Camp, Namak Mandi, People’s Mandi and Hospital Road where upto Rs30 per bread was being charged.
Riaz Khan urged the district administration to control prices of flour and ensure that the essential commodity was available in open market to people on the government approved rate. The prices of flour was also increased in Nowshera, Swabi, Mardan and Charsadda districts, annoying masses.
Riaz said that provision of affordable flour (ata) to people was the responsibility of the Provincial Government and urged the KP Chief Minister to approach Punjab Government where PTI was ruling to provide quick flour bags stock of the commodity to facilitate people of KP.