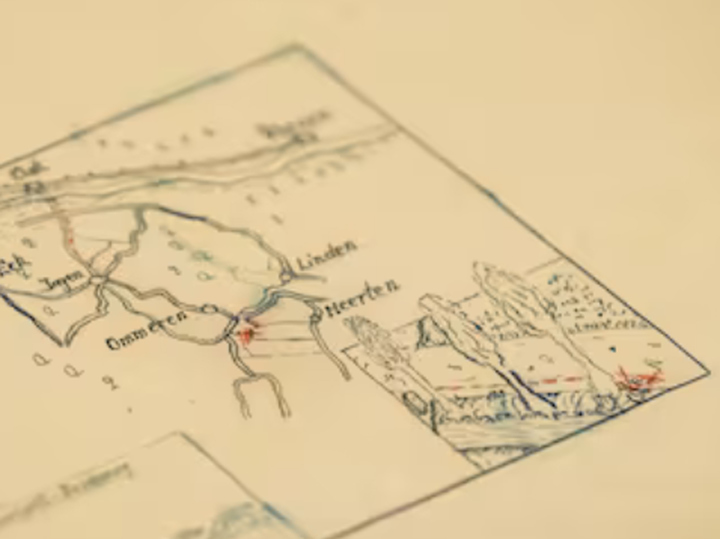 A World War II document revealing a cache of coins and jewels hidden by German soldiers has been leaked online by Dutch archivists. This treasure map has sparked a buzz around the search for a £15 million Nazi treasure.
As the Nazis fled occupied Europe in the final days of World War II, four German soldiers buried a treasure trove of gold coins and jewels in the middle of nowhere in the Dutch countryside, writes The Observer. Nearly 80 years later, hopes of finding the buried loot were raised after the National Archives of the Netherlands released a plethora of documents – and a map of the hoard with a cross marked.
The hoard – four chests of ammunition filled with coins, watches, jewelry, diamonds and other precious stones – is believed to have been worth at least 2 million or 3 million Dutch guilders in 1945, equivalent to about £15.85 million today. money.
“A lot of researchers, journalists and amateur archaeologists are really interested and excited,” says Annette Waalkens, an advisor to the National Archives, who released more than 1,300 historical documents last week. Whether any would-be treasure hunter will be able to find these boxes is another matter. Among the array of World War II documents is a 7cm-thick folder that chronicled the Dutch state’s fruitless efforts to recover Nazi-looted treasures after the war.
Researchers believe that the treasure was buried in April 1945, when the Allies were on the verge of liberating Arnhem in the eastern Netherlands. The German soldiers fled. “They decided to bury the treasure because it was getting too hot under their feet and they were starting to get scared,” Annette Waalkens tells The Observer.
The precious cargo was buried in poplar roots at a depth of 70-80 cm near the village of Ommeren, about 25 miles from Arnhem. Wealth could have disappeared from historical records forever, if not for the chatty German soldier Helmut S., who took part in burying the treasure.
The National Archives is hiding his full name, as He-lmut S., born in 1925, may still be alive, although no one has been able to track him down.
Of the other three soldiers, two did not survive the war, and another simply disappeared.
Helmut S., however, remained on the radar. “He was a bit taciturn in Berlin,” says Waalkens, and he soon caught the attention of the Dutch authorities in the occupied German city. They passed the information on to the Beheersinstitut (Dutch Institute for Asset and Property Management, the body responsible for managing the wealth of people who disappeared during World War II, including deported Jews, Dutch spies and German citizens who lived in the Netherlands).
According to Helmut S., the treasure was discovered when the Arnhem branch of the Rotterdam Bank was bombed in August 1944. The safe was broken, leaving jewelry, coins, and other riches strewn across the street. His comrades pocketed what they could see and later hid the loot in zinc ammunition boxes.
In 1946-47, the Beheersinstitut conducted three searches. The first failed because the ground was frozen. The second, with the help of primitive metal detectors of that time, did not give anything. For the third attempt, they called in the help of Helmut S. from Germany, but despite his knowledge of eyewitnesses and the map provided by him, the excavations were unsuccessful.
Archivists are not sure who made the map, but they believe it was done by one of the German soldiers. After Helmut S. handed it over, the map ended up in the archives of the Beheersinstitut with the proviso that it would not be published for many years to protect the financial interests of the property owners.
Dutch officials put forward several theories. The treasure may have been dug up by a local resident who witnessed it being buried, or by a mysterious German soldier who survived. Others suspected the Americans. During the third excavation, the Beheersinstitut staff encountered two American officers and noticed that the soil in the area had been disturbed. “And they actually came up to them and said, ‘Well, we don’t know what you’re doing, but please mind your own business, it’s our business,’” Vaalkens says.
Joost Roosendaal, assistant professor of history at Radboud University Nijmegen, told the Observer that looting was common on both sides. In October 1944, at least five banks in Arnhem were looted by German soldiers. After being liberated in April 1945, another was robbed by soldiers in British uniforms, a group that included one Dutchman who served in the South Wales Border Force.
The historian believes that Helmut S. misinterpreted some of the facts. Hellmuth’s version that his comrades stumbled upon the jewels in the street after the bank attack in August 1944 “can’t be true” because Arnhem wasn’t bombed that month, Roosendaal argues.
It wasn’t until September that the Allies tried to take Arnhem in the failed Operation Market Garden. This reckless gamble by Field Marshal Bernard Montgomery to break into Germany, writes The Observer, cost many lives and was later dramatized in the 1977 film A Bridge Too Far.
Roosendaal believes that it is likely that other soldiers stole the jewels in November 1944 when German troops set fire to the Rotterdam bank in Arnhem, the fire intended to “cover up a bank robbery.”
The historian doubts that the treasure will ever be found. The area around Ommeren was heavily bombed on the night of 24 April 1945 by the British Royal Air Force. He suspects that the cache was “destroyed by this bombardment”, allowing the treasure to be discovered by locals or Allied troops, or the Germans moved it to another location.
“I really hope the treasure is still there,” says Annette Waalkens. “And that when it is dug up, perhaps we can track down some of the rightful owners.”