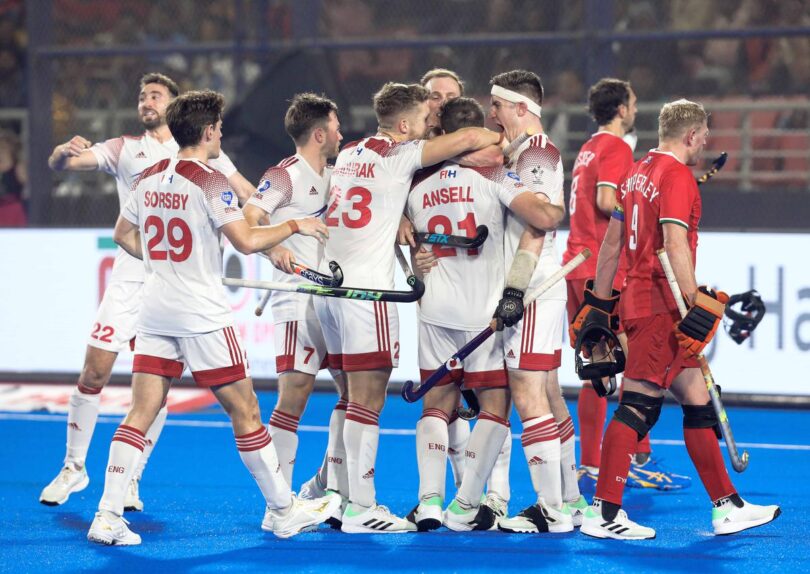 NEW DELHI (Agencies): England got their World Cup campaign off to a winning start with a comfortable 5-0 win over debutants Wales in India.

Liam Ansell scored two penalty corners and there were also goals for Nice Park, Phil Roper and Nick Bandurak. The full-time, experienced English side showed its strength against the part-time opposition.

Wales are playing in a men’s World Cup for the first time in their 128-year history. At one point Wales were down to nine men as they struggled to make an impact until a more spirited final quarter performance.

Wales have not beaten England since the 1970s and a famous win in Rourkela’s new 20,000-seater hockey stadium already looked a tall order when Park put England ahead after just 35 seconds.

The first half was one of few clear chances, but English pressure grew steadily and a string of penalty corners just before the break proved too much for Wales as Liam Ansell eventually converted one to double England’s lead.

The third quarter was England’s strongest and the game was effectively wrapped up with brilliant strikes by Ansell and Roper. Ansell delightfully lifted the ball over Great Britain team-mate Rupert Shipperley’s stick from a penalty corner before firing past Toby Reynolds-Cotterill. Roper then produced the goal of the game with an unstoppable reverse stick effort from the very edge of the circle, judged to be just inside by the video umpire. The only blot on England’s copybook was Zach Wallace’s penalty stroke miss. But Nick Bandurak sealed the win with a late fifth.

Wales produced their best hockey – and best chances – in the final quarter. But England kept their penalty corners out and Jack Pritchard narrowly failed to connect with Ben Francis’ flick towards the back post.

This was a comfortable win for England, who next take on hosts India in Pool D on Sunday. Wales’ showing in the final quarter will give them some confidence before another tough match against Spain on the same day.