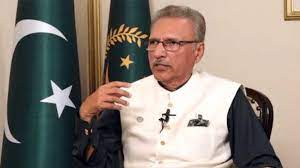 ISLAMABAD: President Dr Arif Alvi has rejected the appeal of a person, accused of harassment at workplace and referred the case back to the Federal Ombudsman Secretariat for Protection Against Harassment at Workplace (FOSPAH) for final adjudication after appraisal of the evidence.

While deciding on an appeal filed by the accused, President Alvi held that the request to once again cross-examine the complainant after the engagement of a fresh counsel, had no ground.

The president endorsed Ombudsperson’s observation that the appeal filing by the accused was an apparent attempt to prolong the impugned case indefinitely to enhance the anguish and agony of the complainant.

It was further observed that the matter had already consumed sufficient time in the disposal due to the accused’s miscellaneous applications and was tantamount to initiating a new round of litigation which prima facie was against the spirit and scheme of the Act 2010.

The accused filed another representation despite the fact that the proceedings of the complaint were pending before the learned Ombudsman and a decision in this regard had yet to be made after appraisal of the evidence on the question of whether the element of harassment had been established or otherwise. (APP)