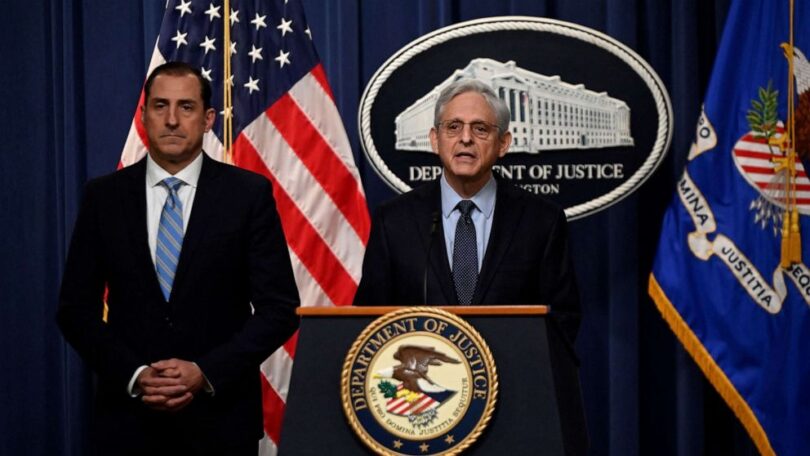 Attorney General Merrick Garland appointed former DoJ official Robert Hur as special counsel on January 12 to handle the investigation into classified documents from Joe Biden’s days as vice president, found at his Wil-mington, Delaware home, in addition to papers discovered in November 2022, at the Penn Biden Center, a Washington-based think tank.
News that a fresh discovery of five pages of classified documents had been made at Joe Biden’s Wilmington, Delaware, ho-me prompted Republicans to erupt in indignation over the perceived “double standards” at play. Some questioned why the Federal Bu-reau of Investigation (FBI) had not yet raided his ho-me, like was the case with former President Trump.
They also lambasted the Democratic president’s Department of Justice (DOJ) as a ‘corrupt mess.’
Republican Congresswoman Lauren Boebert went on Twitter to point out that the new batch of sensitive information was found after White House press secretary Karine Jean-Pierre said that “the search of Biden’s home was complete.”
“Looks like they’ve got documents coming out of the woodworks over in Wi-lmington. Still no FBI ra-id…” Lauren Boebert queried.
Texas Republican Senator Ted Cruz similarly tweeted to ask when a “full FBI raid” would happen.
Tom Fitton, the President of Judicial Watch, a public interest group that investigates and prosecutes government corruption, also tweeted that Biden White House Counsel had traveled to the president’s Delaware home along with officials of the DOJ to look for more classified docs only after a Special Counsel had been appointed. He slammed Biden’s DOJ as a “corrupt mess.”
US reporter Mollie He-mingway also hit social m-edia, underscoring that the FBI had eagerly raided Tr-ump’s Mar-A-Lago while not even noticing VP Biden “hoovered up classified docs.”
Joe Biden, who has now found himself in the crosshairs over the classified documents row, had been quick to rip into the ex-POTUS Trump over the sensitive papers that were being housed at his Mar-a-Lago estate which prompted a raid by the FBI.
“How that could possibly happen, how one anyone could be that irresponsible,” Biden fumed on 60 Minutes in September 2022, adding:
“And I thought what data was in there that may compromise sources and methods. By that, I mean, names of people helped or et cetera.”
In August 2022, the FBI conducted a raid on Tru-mp’s Mar-a-Lago residence as part of a probe into his post-presidential handling of classified documents.
Now, Donald Trump, w-ho has repeatedly denied a-ny wrongdoing in the matter, and slammed the “una-nnounced raid” on his ho-me as “not necessary or ap-propriate,” took to his soc-ial platform Truth Social to question whether the Fede-ral Bureau of Investigation (FBI) will react similarly to the Biden discovery.
“When is the FBI going to raid the many homes of Joe Biden, perhaps even the White House? These documents were definitely not declassified,” the former US president wrote.
The current developments come amid the discovery of several batches of classified documents at the Penn Biden Center for Dip-lomacy and Global Engage-ment think tank in Washi-ngton, and in filing cabine-ts, a private library and a locked garage Biden’s Wil-mington, Delaware, home dating to his tenure as Bar-ack Obama’s vice president.
On January 14, presidential counsel Richard Sauber announced that Joe Biden’s lawyers had discovered five additional pages marked classified, saying:
“Because I have a security clearance, I went to Wilmington Thursday evening to facilitate providing the document the President’s personal counsel found on Wednesday to the Justice Department. While I was transferring it to the [Department of Justice] officials who accompanied me, five additional pages with classifications markings were discovered among the material with it, for a total of six pages. The DoJ officials with me immediately took possession of them.”
The Justice Department named seasoned trial law-yer and former DoJ official Robert Hur as special counsel in the Biden document case, with Hur taking over the probe from John Lausch.
Jim Jordan, the Ohio R-epublican Congressmen re-cently appointed chairman of the House Judiciary Co-mmittee, has vowed to keep a close eye on the DoJ’s investigation, and figure out why the classified documents found ahead of the November midterms at the DC think tank didn’t come to light at the time. Fur-thermore, the House Over-sight Committee has laun-ched a separate probe, with Committee chairman James Comer expressing concerns that President Biden may have “compromised (intelligence) sources and methods with his own mishandling of classified documents.”