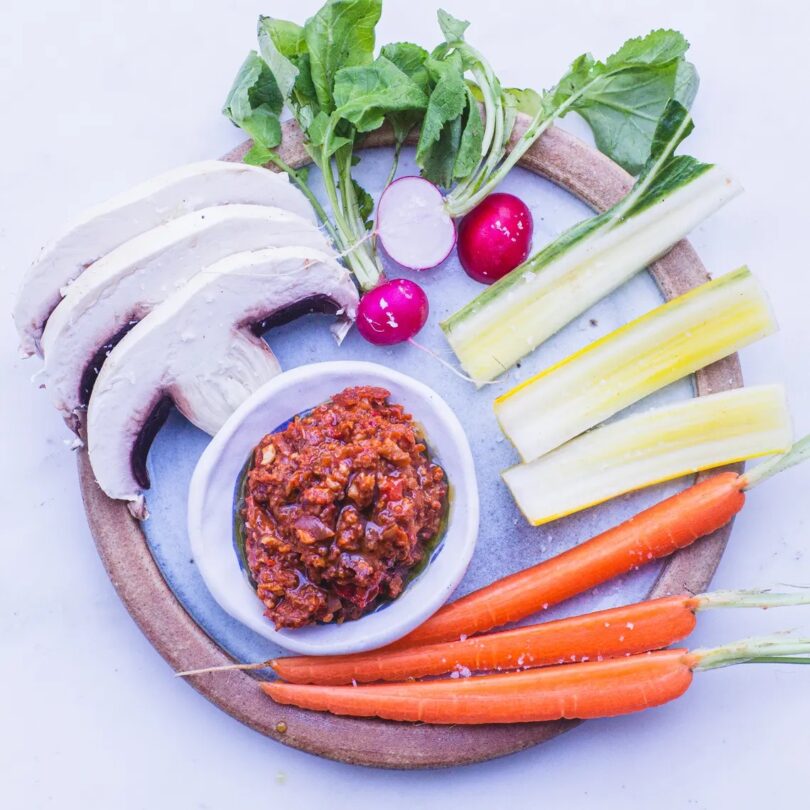 Romesco is a pungent, piquant and powerful flavour bomb that transforms even mundane meals into really tasty ones, and it’s made simply by upcycling an old pepper, tomato and piece of stale bread into a certified Catalan delicacy. My first head chef cooked mainly Spanish and Moorish-inspired food, and working with him had a profound impact on my life. It’s one reason I now love to cook colourful, rustic and flavourful food that draws on traditional cultures to create thrifty and nutritious dishes which make the most of a particular ingredient. This kind of old peasant cookery has the added benefit of supporting personal and planetary health, too.

This amazingly tasty and intense sauce goes really well with almost any simple neutral meal, and especially with grilled vegetables, fish, chicken or lamb. If you don’t have a food processor, no problem; instead, finely chop the bread, nuts and vegetables, or pound them in a mortar, to make a deliciously rustic version of the sauce – this is how I make it at home, though it does take a little more time.

Put two tablespoons of extra-virgin olive oil in a frying pan on a medium-low heat, then throw in the bread and nuts, fry gently, tossing occasionally, until golden brown all over, then tip into a food processor. Return the pan to the heat with two more tablespoons of oil, and add the chopped red pepper, tomato and onion, and saute for eight minutes, or until any excess moisture has evaporated. Stir in the garlic, cook for two minutes more, then add the hot smoked paprika and ground cayenne pepper to taste. Fry for another minute, then add to the bread and nuts in the food processor bowl. Pour in the vinegar, pulse until the sauce is evenly chopped, then stir in more extra-virgin olive oil to taste, season and serve.