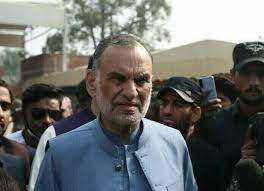 ISLAMABAD: The Islamabad High Court (IHC) on Monday issued notices to the government and the departments concerned in post-arrest bail plea of PTI Senator Azam Swati.

Chief Justice Aamir Farooq heard the plea. Mr Swati in his application submitted through his counsel Babar Awan stated that he didn t post alleged tweets and that Swati had no intention to defame any state institution. The plea further stated that even the prosecution had no evidence in this regard. “The PTI leader is 75-year-old man and is heart patient,” the counsel said.

The court issued notices to the state and the departments concerned and sought replies till Jan 2, 2023.

PTI leader Asad Umar said on the one hand, the one facing corruption worth billions had got his bail secured while sitting in London but, on the other, Azam Swait s bail was not accepted despite passage of several weeks.