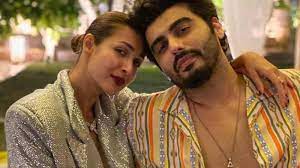 LAHORE: Bollywood actor Malaika Arora celebrated the Christmas evening with her parents and family while Arjun Kapoor was missing.

She did mention that she missed him a lot. Fans were speculating that maybe his work schedule and engagement didn’t allow him to be a part of the celebrations. But Arjun himself clarified the reason for skipping the occasion.

Taking it to his instagram, he posted a picture of him lying in the bed wearing a reindeer band. He looked unwell from the picture. He wrote: “Unwell reindeer this holiday season…@malaikaaroraofficial #festiveseason #christmasmood (Don’t worry it’s not even Covid).”

Yesterday, Malaika posted pictures giving her fans a glimpse of her celebrations from the evening. She wrote: “Merry Christmas. We missed you Arjun Kapoor.”

The pictures she shared showed her parents, her sister Amrita and husband Shakeel Ladak and their children Rayaan and Azaan.

On the work front, Malaika Arora is currently hosting her show called Moving in with Malaika. On the other hand, Arjun Kapoor is all set for the release of his upcoming film “Kuttey”.