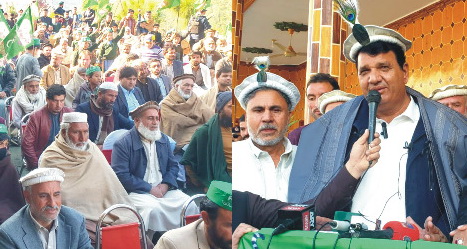 DIR UPPER: Adviser to the Prime Minister for Political and Public Affairs and Culture Division Engr Amir Muqam, here, on Friday, said that “Imran Niazi has failed to deliver for masses’ despite his party’s nine-year-long rule in Khyber Pakthunkhwa”.

Addressing to the party workers and people of Dir Upper, after inaugurating electricity projects, including an electrical feeder at Akhgram, Engr Amir Muqam said that “Imran Niazi has ruined the country’s economy, and social values and was found guilty of taking foreign funding even though from rival countries in a bid to destabilize and bankrupt Pakistan”.

He said the people of KP were now looking towards PML (N) for the resolution of their problems and would “reject the looter of Toshakhana” in the upcoming general election. “Imran Khan has brought disgrace to the country after [allegedly] selling the Haram Sharif’s model watch for monetary gains in the market,” he said, adding that such expensive gifts were given to the prime minister by foreign dignitaries as a mark of respect and strengthening of friendship rather than selling it in the open market.

Engr Amir Muqam said that even close friends of Imran Khan were now talking about how he (Imran) was selected in the 2018 general election and imposed on the country.

Amir Muqam said the federal government would complete its tenure and general elections would be held on time. The PML-N leader said there would be no early election on the dictation and will of a ‘failed’ political leader. He said the country president had admitted that the establishment had helped bring Imran Khan into power in 2018. He said the PTI had no issue in the Khyber Pakhtunkhwa so it should dissolve the provincial assembly. He claimed the PNL-N Supremo Nawaz Sharif had included the Chakdara Chitral route in the CPEC project while the PTI government had dropped it.

He said the former premier Imran Khan had ruined the economy of the country and the PDM had been trying its hard to steer the country out of that turmoil. He alleged that Imran Khan had done a financial terrorism with the country and he should be taken into accounts. He said that the PTI chief was leveling baseless allegations against Mian Nawaz Sharif and Mian Shahbaz Sharif but the foreign courts had proved him wrong.