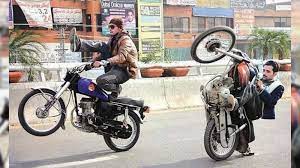 RAWALPINDI: City Traffic Police (CTP) Rawalpindi have finalized arrangements to control one-wheeling and car stunts by youngsters on eve of New Year’s night and seven special squads have been formed. According to a CTP spokesman, CTP had decided to take strict action against traffic rules violators.

CTP on the directives of Chief Traffic Officer (CTO) Taimoor Khan would take action in accordance with the law against the violators. 320 Traffic Wardens would be deployed on city roads to ensure a smooth flow of traffic and control one-wheeling.

The CTO had instructed the Traffic Wardens to net those involved in the one-wheeling and car-racing.

He said that the CTP, in this regard, had formed seven special squads to arrest the violators and impound their vehicles.

He informed that several arrangements were made to curb the activity aimed at protecting the youngsters as one-wheeling is one of the causes of death and severe injuries for the riders.

He said that they would conduct night operations on Benazir Bhutto Road near Nawaz Sharif Park and the Committee Chowk underpass to apprehend one-wheelers. The cases would be filed against one-wheelers. “Efforts are being made to curb the activity (one-wheeling) as it had claimed several precious lives and a number of youngsters had sustained serious injuries due to it,” he added.

He said, one-wheelers were not only endangering their own lives but were also a threat to other road users. The spokesman urged the parents to come forward and play their role in curbing the activity. (APP)