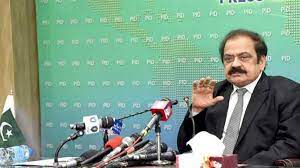 ISLAMABAD: While expressing his views on former premier Imran Khan’s expected announcement regarding the dissolution of assemblies, Minister for Interior Affairs Rana Sanaullah has said that there is a competition between Imran Khan and Punjab Chief Minister Pervaiz Elahi and it is yet to be clear who will take a U-turn and who will take a smart turn.

While referring to Elahi, the minister said how is it possible that the one who didn’t let the FIR lodged as per the desires of Khan will dissolve assemblies on his suggestion. He said that Imran Khan will suffer political loss no matter whether assemblies are dissolved or not.