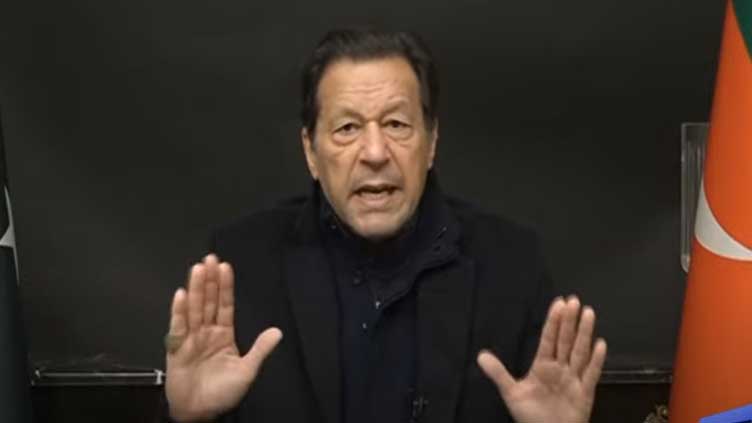 LAHORE (NNI): Pakistan Tehreek-e-Insaf (PTI) Chairman Imran Khan said on Sunday that the country was facing the biggest crisis in its history.
Addressing a women’s convention via video link, the deposed premier said the country could both lead to prosperity and decline. He went on to say that the country was at a crossroads.Going back to the 1990s, Mr. Khan said the country started to face a crisis after the 1990s.
Mr Khan recalled his demand of free and fair elections, adding that only with transparent polls, there be the possibility of a legitimate government. Mr.Khan slammed the Pakistan Muslim League-Nawaz (PML-N), saying that the plan to install the PML-N s government in Punjab is now underway.He reiterated that there only strong government could take the country out of the quagmire.
Speaking about the country s difficulties, Mr Khan stated that only one person was to blame for the current situation.He also warned that the crisis within the country will intensify in the coming days.
“I made a prediction on the prevailing crisis in the country, seven months ago,”, added Mr. Khan.
Mr Khan lashed out at the PML-N and PPP leadership, saying, “For 20 years, both of these two ruling families have been hurling allegations at each other.”
Mr Khan took a dig at the Pakistan Democratic Movement (PDM), saying the performance of the PDM leadership was only visible in advertisements and propaganda.
Mr. Khan expressed his thoughts on political engineering, stating that it was not intended to solve problems.
Mr Khan lamented that the masses were deprived of flour, claiming that people were losing their lives for the sake of flour, and that people were being forced to flee the country under the current circumstances.
Taking a dig at the coalition government, Mr Khan recalled that the incumbent government came into power to fulfill the agenda of the enemies of the country.
Mr Khan warned the state institutions that if the situation was not controlled, the country would be dragged into a quagmire, following in the footsteps of Sri Lanka.
To highlight the inflation, Mr Khan stated today that the country was experiencing the record inflation in its 50-year history, and that it was not going to stop.
Talking about his struggle, Mr Khan stated, “We are pouring onto the streets for the sake of the country, not the ministries.”
Meanwhile, while condemning terrorist acts and threats, former prime minister and PTI Chairman Imran Khan has criticized that there is a complete vacuum of a cohesive counter-terrorism policy which is giving rise to terrorism in which our security personnel are being targeted specifically.
In a tweet posted on Sunday, PTI Chairman Imran Khan wrote: With a complete vacuum of a cohesive counter terrorism policy and a bizarre intel focus on manufacturing doctored audios & videos, we are seeing a dangerous rise in terrorism with our security personnel being specific targets. We strongly condemn these terrorist acts and threats.