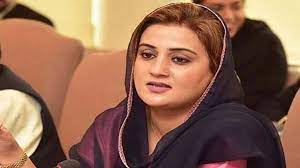 Talking to the media here at Model Town, she said the Pakistan Tehreek-e-Insaf chairman wanted an NRO [National Reconciliation Ordinance, or a deal].

Why Imran Khan does not take any legal action against Financial Time which accused him of money laundering, she asked.
She said: “Imran Khan never goes to court”, adding that time had come when he would have to be answerable for all his misdeeds. She said each and every individual in the country was answerable to the law. She said, “Imran Khan gives lectures that nobody is above the law, then why he considers himself above the law.”

Azma Bukhari said, ” The PML-N does not believe in political victimisation.”

She said the PTI should get forensic test of audio-leaks [of Bushra Bibi] to prove their authenticity.

To a question, she said that Imran Khan could only target its political opponents through negative tactics. (APP)