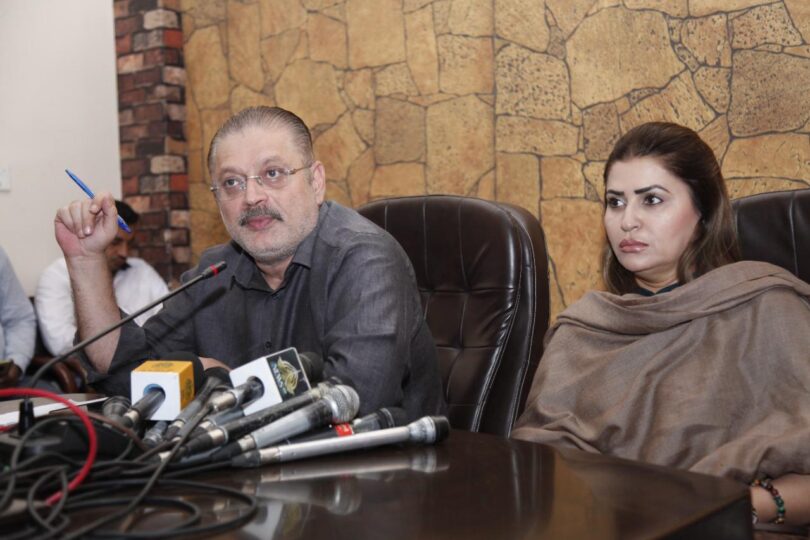 KARACHI: The Pakistan People’s Party has announced to hold country-wide rallies tomorrow to express solidarity with Chairman PPP and Foreign Minister Bilawal Bhutto Zardari over his response to his Indian counterpart J. Shankir during the briefing in the United Nations.

The People’s Party has also appealed to other political parties to participate in the country-wide rallies to be held tomorrow and to express full solidarity with Foreign Minister Bilawal Bhutto Zardari’s statement because this is not only a issue of a political party but it is a matter of honor of the entire country.

This was announced in a joint press conference of Federal Minister for Poverty Alleviation and Social Saftey Shazia Atta Marri and Sindh Minister for Irrigation and Mass Transit Sharjeel Inam Memon held at Clifton Karachi.

While talking to media persons, Federal Minister Shazia Atta Marri said that the statement of Indian Foreign Minister J. Shankar was a futile and irresponsible statement against the Pakistan, on which Foreign Minister of Pakistan Bilawal Bhutto Zardari gave him a strong and bold befitting response.

She said that we want to have good biliteral relations with all South Asian countries and Pakistan People’s Party has always supported better ties with neighboring countries, but current Indian Government is only prompting hatred among the peoples.

Shazia Marri said that Foreign Minister Bilawal Bhutto Zardari did not talk against or criticize on Indian Government at first in the United Nations and Pakistan knows how to respond such remarks of Indian Government? She added that calling Pakistan a center of terrorism is a propaganda of India and we strongly condemned such remarks of Indian Foreign Minister J Shankar. Mr Marri said that Narindra Modi’s government is associating Muslims with terrorism, we were told that India is a secular country, but the Indian government is suppressing and violating Indian Muslim and also following the ideology of Hindutva.

The Information Secretary of PPP-P Shazia Marri further said that when Narendra Modi was the Chief Minister of Gujarat, he was behind the massacre of Muslims and now, extremists of India are protesting against Foreign Minister Bilawal Bhutto Zardari in India. Indian Foreign Minister made a wrong statement against Pakistan and we want to remind Narendra Modi’s government that we are not afraid of their terrorism and threats, our decency should not be taken as our weakness.

Shazia Marri said that Shaheed Zulfiqar Bhutto had always fought the case of Kashmiris in the United Nations and today his grandson is also fighting for their rights of freedom. She added that Kashmir issue should have been resolved in 1947 and after the resolutions of United Nations. She said that the current Modi’s government has made the Kashmir issue more complicated.

On this occasion, Sindh Minister for Information and Mass Transit Sharjeel Inam Memon has said that Chairman PPP and Foreign Minister Bilawal Bhutto Zardari responded to his counterpart of India in a bold manner and the whole of India has been shaken by Bilawal’s response.

He said that trains were set on fire at the behest of Narendra Modi in India and foot prints all of terrorism acts happened in Pakistan linked to India and the Modi government.

Mr Memon further said the longest curfew in the history of the world was imposed in Kashmir during Modi’s Government. He said that Modi government is committing human rights violations against innocent Muslims of India within his own country.