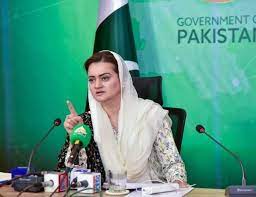 ISLAMABAD : Minister for Information and Broadcasting Marriyum Aurangzeb on Saturday, rubbishing PTI Chairman Imran Khan’s prediction regarding the early polls, said the general election would be held on completion of the constitutional term of the coalition government.

“The election will not be held on mere predictions, rather it will be held on completion of the constitutional term (of the coalition government),” she said in a news statement while reacting to Imran Khan’s remarks about the early polls.

Earlier in the day, a private television channel reported that the PTI chief had predicted the general election to be held either in March or April 2023.

However, Marriyum asked Imran Khan whether his prediction about the general election was pointing toward April 2024.
Responding to Imran Khan’s allegation regarding a deal between a political party and an institution, the minister claimed that it was he who “wanted to seal a deal by offering a lifetime extension to Gen. Bajwa.” She said it was Imran Khan who wanted a “deal” from the DG FIA, but to no avail.

Marriyum alleged that Imran Khan managed to seal a deal with the former NAB chairman by abducting Tayba Gul in the Prime Minister’s House. She said that the masses continued to suffer the pain of inflation and unemployment even after the ouster of Imran Khan from power. Imran pushed the country into an economic quagmire during his four-year misrule which was marred by corruption, bad governance, and incompetency, she added.

The minister said Imran Khan lost the trust of the masses as the historic debt was taken during his government’s tenure as well as false promises of giving 10 million jobs, and 5 million houses to the people were also made. He did hurt their sentiments by making compromises on the Kashmir cause and national interests, she added. (APP)