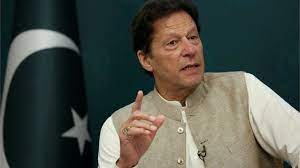 LAHORE: Pakistan Tehreek-e-Insaf Chairman and former prime minister Imran Khan has alleged that the election is being controlled by the establishment but he is sure that general elections would be held in March or April next year.

Talking to senior journalists at his Zaman Park residence in Lahore on Saturday, Imran Khan said PTI MNAs will go to the National Assembly on Monday for confirmation of their resignations.

He lashed out at the PPP and the PML-N, stating that they had nothing except horse-trading of lawmakers. He asserted that economic and political stability was linked to fresh elections, adding that he would not make any compromise for coming into power. “I will not hurt people’s trust for the sake of power.”

Imran continued his criticism of former chief of army staff Gen (Retired) Qamar Javed Bajwa and said if there was ‘another’ army chief, we would have cleaned the country of corruption.

“I came to know in the last year of my government that Gen Bajwa did not want accountability in the country,” he alleged, adding that Gen Bajwa had made a deal with PPP co-chairman Asif Ali Zardari and Sindh Chief Minister Murad Ali Shah.

The former prime minister said that Punjab Chief Minister Parvez Elahi was on his side and he still had trust in him. “There is the possibility of an election alliance with PML Q because they supported PTI,” he added.

He said that Bilawal Bhutto made more foreign visits than Imran Khan and if he is traveling on his own money, are these private tours of Bilawal? “PPP and PML-N have no receipt of funding. On the other hand, PTI has a database of 40 thousand of donors,” he added.

Imran Khan recalled Gen Bajwa thought that the rise of PTI would decrease but it did not happen.  He said the Election Commission of Pakistan is not an independent body rather it is being “controlled” by the establishment.

Earlier, PTI chief Imran Khan said that Nawaz Sharif and Asif Ali Zardari were running away from general polls due to his fear. (NNI)