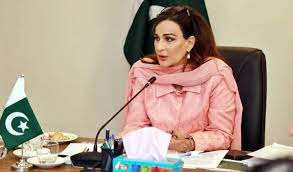 ISLAMABAD: Federal Minister for Climate Change Senator Sherry Rehman on Monday said Imran Khan’s politics of intimidation has led Pakistan Tehreek-e-Insaaf (PTI) to such a blind alley that it had run out of political options.

In a series of tweets, the Minister said Imran Khan did not believe in parliamentary democracy nor in dialogue. “When you do the politics of fascism instead of democratic and constitutional politics, this will be the end.”

Senator Rehman underlined that the differences between Imran Khan and his allies were exposed whereas the PTI members were also unhappy with Imran Khan’s decision. “It means only one person wants to dissolve break the assemblies. In the past, Ishaq Khan and dictators had dissolved the assemblies, Imran Khan’s thinking is not different from them.”

She added that Khan was blaming others for the failure of his political narrative. When the narrative of foreign conspiracy was exposed, he (Imran Khan) started blaming the former chief of army staff for the success of no confidence motion.

The Minister said Imran Khan had a misconception that the government and institutions would accept their demands under pressure. “Only Parliament can get them out of this blind alley.” (APP)