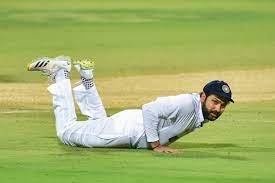 Mumbai (Agencies): Rohit Sharma, the India captain, has been ruled out of the upcoming Dhaka Test as he continues to nurse a thumb injury that he picked up during the ODI series in Bangladesh. Rohit is currently recuperating in Mumbai.

Rohit injured his thumb while fielding in the slips in the second ODI, and was immediately flown home with the aim of having him ready for at least the second Test. Scans in the aftermath of the incident revealed a dislocation that needed a few stitches.

ESPNcricinfo understands Rohit’s injury is healing well, but is still deemed risky given the volume of cricket India are due to play over the next two months. He is likely to undergo a medical assessment next week.

India play six ODIs and as many T20Is in January against Sri Lanka and New Zealand at home, the squad for which will be announced in due course.

The white-ball leg will be followed by a four-Test series at home against Australia beginning February 9.

It isn’t clear yet if the new selection panel will be in place before the squad is chosen for India’s home season. As on Monday, no interviews had taken place.

With Rohit unavailable, KL Rahul will continue to lead India, with Cheteshwar Pujara as his deputy. Rohit’s absence also means Shubman Gill, who hit his maiden Test century in India’s 188-run win in Chattogram, is expected to continue opening the batting with Rahul. Abhimanyu Easwaran is the reserve opener in the squad.

The Indian team arrived in Dhaka on Monday morning after wrapping up victory in Chattogram in the opening session of the final day on Sunday.

They’re expected to hold two training sessions – on Tuesday and Wednesday – in the lead-up to the second Test at the Shere-Bangla Stadium.