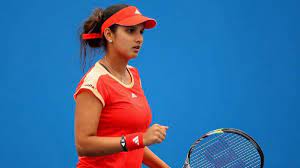 NEW DELHI: Indian tennis legend and wife of Pakistani cricket Shoaib Malik, Sania Mirza has announced that she will take retirement from the game at next month’s Dubai Duty-Free Tennis Championships.

Mirza was due to hang up her boots at the end of last year’s season. However, an untimely injury forced her to change her retirement plans, which she had even announced on her official Instagram handle.

Mirza has now said that she likes to do things on her own terms and that is why she didn’t want to be forced out by injury.

“I was going to stop right after the WTA Finals, because we were going to make the WTA Finals, but I tore my tendon in my elbow right before US Open so I had to pull out of everything. And honestly, the person that I am, I like to do things on my own terms. So I don’t want to be forced out by injury. So I’ve been training,” Mirza told wtatennis.com.

“The plan is to try and retire in Dubai during the Dubai Duty-Free Tennis Championships. I’m 36, and honestly my body is beaten, that is the main reason for it. And I really don’t have the capacity in my mind to emotionally push that much anymore. I turned pro in 2003. Priorities change, and now my priority is not to push my body to the limit every single day,” she added.

Mirza, who made her professional debut in 2003, has been the face of India’s women’s tennis for the past 19 years. Besides winning six Grand Slam doubles titles in her illustrious career, Mirza climbed to a career-high ranking of 27th in the WTA singles rankings in 2007, making her the first female Indian singles player to reach the top 100. In doubles, Mirza became the World No. 1 in April 2015, becoming the female Indian tennis player to reach the summit. However, the Indian star could only keep hold of the top spot for 21 months before dropping down in the rankings tally in January 2017.