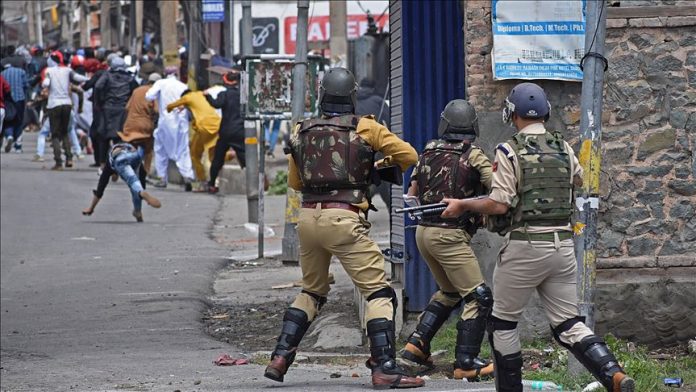 ISLAMABAD (APP): Indian troops in their unabated acts of state terrorism martyred 214 innocent Kashmiris, including one woman and five young boys, during the year 2022 in the Indian illegally occupied Jammu and Kashmir.

According to a report released by the Research Section of Kashmir Media Service, today, 57 of the martyrs were killed in fake encounters and custody. The jailed APHC leader, Altaf Ahmed Shah also died during his continued illegal detention in the infamous Indian Tihar Jail. The authorities did not allow people to offer his funeral prayers.

The troops also killed two Hindu labourers in a fake encounter in Rajouri town in the year.

The report said, the killings by the troops, paramilitary and police personnel rendered 13 women widowed and 35 children orphaned while 10 women were molested, abused or disgraced by the men in uniform during the year. It said that Indian forces destroyed 44 residential houses and structures.

The Indian authorities did not allow people to offer Friday prayers 14 times at the historic Jamia Masjid in Srinagar besides disallowing other religious functions like Muharram processions, Shab-e-Baraat, Shabe Qadr and Eid Milad-un-Nabi (SAW) gatherings in the occupied territory.

The report said that in the month of December 2022 alone, the Indian troops martyred seven Kashmiris. At least 43 youth were arrested in the month, it said, adding that the Indian forces’ personnel destroyed a residential house during the period.

The report pointed out that since 5th August 2019, when Narendra Modi-led fascist Indian government revoked the special status of IIOJK, Indian troops, paramilitary and police personnel have martyred 730 Kashmiris till date.

It added that 96,163 Kashmiris have fallen to the Indian bullets during the last 34 years in the occupied territory.