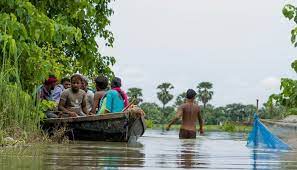 DEHRADUN (AFP): Authorities in one of the holiest towns in the Indian Himalayas were evacuating panicked residents on Sunday after hundreds of houses began developing yawning cracks and sinking, officials said.

The cause of the apparent subsidence in Joshimath in the northern state of Uttarakhand was unclear, but residents blamed the building of roads and tunnels for a nearby hydroelectric project.

Prime Minister Narendra Modi has called a high-level meeting for later Sunday to discuss the problem after the government formed an expert panel to carry out a “rapid study” into the cause.

Local official Himanshu Khurana told AFP that at least 60 families had been relocated into shelters and many more were likely to be shifted out from their sinking dwellings.

Residents said a much larger number had already fled their homes and that around 600 houses and hotels were sinking in the town of around 20,000 people.

Another official said on condition of anonymity that several areas in the town had been “demarcated unsafe” and entry restricted.

“People are deeply worried. The fear is that the town is sinking,” he said as helicopters surveyed the area.

Many locals have been forced to sleep out in the freezing cold and said they had been warning authorities for weeks and in some cases months about cracks in buildings and roads, some of which were oozing brown muddy water.

One woman, Vineeta Devi, said that in October, the “cracks began to appear in her walls which have now become so wide that her house is on the brink of collapse, like 25 other houses in her neighbourhood.”

“What will happen to my children? How would they study now?” she told AFP.

“We made this house with our life’s earnings, but now it’s gone,” said Sunaina, another resident.

Around 1,800 metres (6,000 feet) above sea level, Joshimath is a major gateway to a number of important religious sites in the Himalayas, attracting thousands of pilgrims every year.

The town also hosts a major Indian army base and a strategic road to the disputed border with China that has also reportedly developed wide cracks.

The region is prone to earthquakes and has seen a number of disasters in recent years blamed by experts on melting glaciers and untrammelled construction.

Building projects include hydroelectric plants as well as a major road improving military access to the Chinese border area and Hindu pilgrimage sites — a pet project of Modi’s.

In February 2021, at least 200 people were killed in flash floods in Joshimath and surrounding areas in a disaster that experts partly blamed on excessive development.