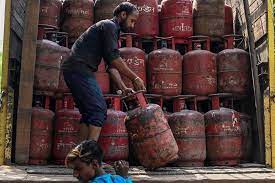 NEW DELHI (Reuters): India’s Rajasthan state, ruled by the main opposition Congress party, will halve the price of cooking gas for poor households from April as it seeks to cushion them from the pain of high inflation ahead of local elections next year.

The country’s annual retail inflation stood at 5.88% in November — much higher than the central bank’s target of 4% though it has eased from 6.77% in October due to a softer rise in food prices.

The state is one of several to announce measures to help households in the midst of a cost-of-living crisis after food and fuel prices surged in the wake of Russia’s invasion of Ukraine.

Rajasthan’s government said late on Monday it would provide 12 canisters of cooking gas for 500 rupees ($6) to poor families a year. One cylinder can typically sustain a family of four for a month.

“This will reduce the financial burden on the common person in this era of inflation,” Rajasthan Chief Minister Ashok Gehlot said in a tweet.

Congress leader Rahul Gandhi, whose cross-country march is passing through Rajasthan, hailed the move on Twitter and urged Prime Minister Narendra Modi to “serve the people suffering from inflation”.

The finance ministry told parliament on Monday it was trying to check inflation through measures like curbs on exports of wheat and rice and a reduction in import duties on lentils.

Rajasthan has also unveiled plans to supply households with 50 units of electricity every month for free. Measures by other states include Uttar Pradesh’s decision to cut electricity tariffs and distribute 1,000 rupees in cash to the poor.

Modi in 2016 launched a programme giving free cooking gas connections to poor families. Energy companies controlled by the federal government provide the first refill free of cost to such families.