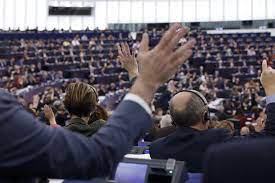 According to the media, the European Parliament’s approval of a resolution calling on the bloc to consider a terrorist designation for the Islamic Revolutionary Guard Corps (IRGC) has received strong condemnation from senior Iranian leadership and military commanders. Meanwhile, the EU also condemned the Raisi government’s response to the ongoing protests and the executions linked to those protests, and drone sales to Russia, while the bloc also recommended sanctions against Iranian Supreme Leader Ayatollah Ali Khamenei, President Ebrahim Raisi and all business and entities linked to the IRGC.

Iran and the west are engaged in intensive verbal battles over the past months since the violent anti-regime protests engulfed the Asian nation in September last year. Tehran accused the western powers of supporting the anti-government protesters in its country while the EU was enraged by Tehran’s forceful suppression of rights activists along with Iran’s provision of military armed drones to Russia which caused a significant setback for Ukrainian security forces amid heightened hostility in Bukhmut and Soledar regions. This bilateral row reached its peak when the EU parliament adopted a resolution calling for the imposition of sanctions against Iranian individuals and entities responsible for human rights violations including senior political and military leaders together with the most powerful and influential Islamic Revolutionary Guard Crops and its subsidiaries, like the paramilitary Basij and the Quds Forces.

In fact, the EU’s latest step was the beginning of the long way toward listing Iranian individuals and entities as the 700 members EU Parliament proposed sanctions that need the approval of the EU Council followed by the 27 government consensus to become a policy of the bloc. The EU announcement has been welcomed by Iranian dissents across the world but it prompted a massive outcry from the Iranian ruling elite which termed it fatal not only for the EU-Iran bilateral relations but also called it the last nail in the coffin of the already dead 2015 Iran Nuclear Deal.

Historically, Iran and European Union have already downgraded diplomatic and trade relations, while two major EU nations, the UK and France had been engaged in shuttle diplomacy with Tehran to revive the scrapped JCPOA, but those efforts failed at the last movement after Iran linked the revival of deal with the IRGC’s removal from the US’s terror list. The current anti-Iran uproar in the western capitals is the outcome of Tehran’s military collaboration with Moscow otherwise clerics’ human rights violations usually received mere condemnation and media tumult in the west.

Presently, Iran’s Foreign Ministry, the IRGC, and lawmakers are in consultation to give a coordinated and befitting response to European Union as the IRGC is not only a powerful military organ but an effective foreign policy instrument and a main pillar of Iran’s revolutionary regime in the post-1979 era. The Raisi government is actively working to stall the EU’s bid to designate its lethal arm by using all available tacts and tools, however, the United States and its all-weather allies are determined to hit Iran’s most sensitive part to effectively respond to Putin-Raisi plan. In fact, all is customary in war, one must be ready to get a punch in reward for a slap.