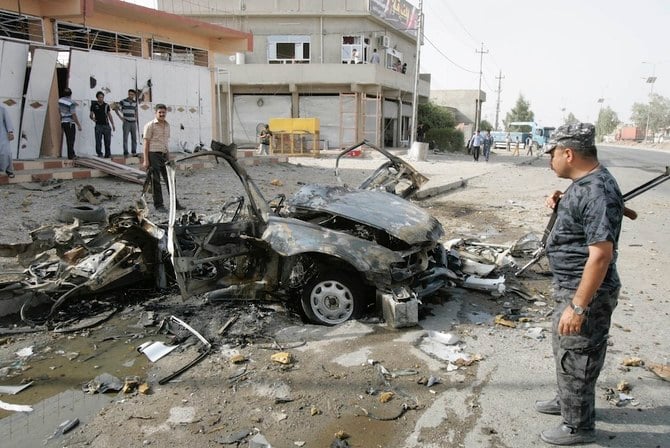 KIRKUK (Agencies): At least seven police officers have been killed in a bomb and gun attack in northern Iraq.

The attack took place near the oil-rich city of Kirkuk, about 293km (182 miles) from the capital Baghdad on Sunday.

No group has said it was behind the killings, but officials blamed the Islamic State group.

On Wednesday, a roadside bomb killed three Iraqi soldiers near Baghdad. IS said it planted the bomb.

The blast was followed by “a direct attack with small arms”.

“An assailant has been killed and we are looking for the others,” the official added, saying that two policemen were also wounded in the attack.

An official from the Ministry of the Interior in Baghdad confirmed the attack.

IS once held 88,000 sq km (34,000 sq miles) of territory stretching from eastern Iraq to western Syria and imposed its brutal rule on almost eight million people.

But Iraqi forces declared victory over the Islamist group in December 2017, after its troops drove IS militants from the Syrian border zone where the Islamists’ final strongholds had been.

The group was driven from its last territory in 2019, but the UN warned in July that it remained a persistent threat.

It is estimated to have between 6,000 and 10,000 fighters in Syria and Iraq, who are based mostly in rural areas and continue to carry out hit-and-run attacks, ambushes and roadside bombings.

In its report, the UN observed that despite “significant leadership losses,” the group has been able to “exploit security gaps and conditions conducive to the spread of terrorism to recruit and to organise and execute complex attacks”.