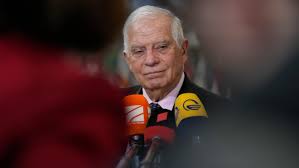 Thank you very much, your Majesty, King Abdullah, for your invitation. I am glad to attend this Conference [for Cooperation and Partnership], representing the European Union.

With last year’s Baghdad Conference, Iraq went back to where it should always be: an important, active and credible country, a driver for peace and stability in the region.

However, a lot has changed since last year. Russia’s war of aggression against Ukraine has been a watershed moment in history. This war does not only concern Europe. It is an attack on the international order with far-reaching security implications.

Iraq itself has faced a number of serious challenges since the [first] Baghdad Conference. But the formation of the new government led by Prime Minister Sudani has successfully ended such a turbulent period.

Excellencies, the European Union is a true friend of Iraq and stands ready to support Prime Minister Sudani’s commitment to undertake comprehensive reforms, as demanded by the Iraqi people themselves. A strong, sovereign, democratic Iraq benefits its people, the region, the European Union and the world. We are planning a European Union-Iraq Council at Ministerial level in the first half of next year.

Iraq cannot be a proxy battlefield. It has been a battlefield for too long. Now, it has to be a regional bridge-builder contributing to reduce regional tensions. That is why we support the Iraqi government’s consistent efforts to develop a balanced foreign policy.

Iraq’s security remains key: not only for Iraq, but for all of us. Since 2017, the European Union contributes to a stronger and safer Iraq through our European Union Advisory Mission (EUAM Iraq) – whose mandate has been prolonged until April 2024 with continued focus on strategic advising on Iraqi civilian Security Sector Reform.

Iraq’s sovereignty and territorial integrity should be respected by all. Armed hostilities endanger the essential efforts of the Global Coalition against Da’esh, which remains a threat to regional and international security.

We support the Government of Iraq to pursue its efforts towards the safe, voluntary and dignified return and reintegration of its citizens stranded in Al Hol. Earlier this month, we participated in the International Donor Conference in Amman to enhance support regarding the repatriation and reintegration of these Iraqi citizens.

That is why we stand ready to engage with all actors in the region in a gradual and inclusive approach. Our strategic partnership with the Gulf has proven to be a useful platform to this end and for stepping up engagement with the region.

We have to work closely with this region on concrete global climate and environmental action, because the region will have an important role to play in the green transition ahead of COP28.

This brings me to the key word: energy.

Energy has always been central to the relations of the region with Europe. Now, we are determined to end the European Union’s dependence on Russian fossil fuels, while at the same time tackling the climate crisis and increasing our autonomy. We have already intensified our engagement with oil and gas exporting countries to ensure Liquified Natural Gas (LNG) supplies to Europe and to advocate for an increase in the oil production to ensure affordability to promote energy security and an accelerated energy transition.

Your Highness, Excellencies, President Putin’s aggression against Ukraine has provoked the most serious case of food insecurity in decades. Many more people, millions of people are suffering from hunger due to this war. The European Union is supporting United Nations-led efforts to address the current situation and working with our partners to promote sustainable alternative solutions in the medium and longer term. And in the short term, we are supporting the region and the most vulnerable countries in the MENA [region] with €225 million. We know that it is not enough, but it is a good example of our will to cooperate.

To summarise, Excellencies, we are ready to do more, differently and better to support Iraq and the region. Because a peaceful, prosperous and democratic Iraq is essential for its people, for Europe and for the wider region.