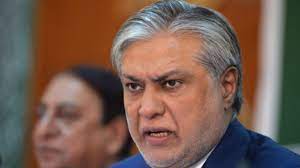 ISLAMABAD: Federal Minister for Finance Ishaq Dar has said Pakistan Tehreek-e-Insaf (PTI) through its white paper is attempting to hoodwink the masses.

Addressing a press conference along with federal ministers in Islamabad on Wednesday, he said the PTI’s white paper did not reveal the truth.

Ishaq Dar said that PTI claimed that when the Muslim League (N) left the government in 2018, the financial debt was 7.6 percent of the total GDP which is contrary to the facts. “The fiscal deficit was 5.8 percent when the interim government was formed in 2018, he added.

He said that PTI’s white paper stated another wrong figure about the tax collection. “PML-N government collected Rs 3843.8 billion in taxes during the fiscal year 2018 and PTI had collected Rs 3828.5 billion in 2019 which is 0.4% less than PML-N’s gatherings.”

He said that when PTI took over the government, the policy rate was 7.5 percent and when we left the government, it was at 6.5 percent. PTI government within a year took it to 13.25, which was an increase of 575 basis points, he added.

Ishaq Dar said it is fact that PTI increased the fiscal deficit by 7.9 percent while we had left that deficit at 5.8 percent in the fiscal year 2018.

Ishaq Dar said that PTI made another false claim that the fiscal deficit was increased from 3.7 trillion to 5.5 trillion in a single year by imposing taxes of 5.5 percent of GDP.