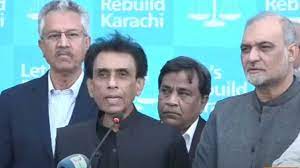 Addressing a press conference, Mr Maqboo, flanked by Jamaat-i-Islami city chief Hafiz Naeemur Rehman, said there was ambiguity in the voters  list that had been made, adding that they were not satisfied over the delimitation issue. The vagueness in statistics proved that pre-poll rigging had already taken place, alleged Mr Maqbool.

Know more: MQM-P to start campaign against delimitataion of constituencies

While the JI city chief said that his party wanted to see Karachiities as mayor and councillors of their own city because the city of lights was being neglected for decades by the rulers. He added that the people of Pakistan did not have a a level playing-field, adding that the Local Government Act was introduced in 2013 but we are unable to hold elections yet.

Earlier on Jan 2, Sindh Governor Kamran Tessori urged the Pakistan Peoples Party (PPP) to fulfill its promise about delimitations for the sake of Karachi’s future. Speaking to media persons, MQM-P’s Kamran Tessori said the issue of missing persons was the biggest problem for the party and only solution to this issue was that they joined the previous government. He hoped that the incumbent government would not disappoint them.

The governor said the city of lights was becoming a city of criminals and pledged to not let that happen. “No one is Karachi’s friend but the port city has always been friendly towards others,” he added. He said the city was collapsing and its education, sewage, gas, electricity and water systems were in tatters. The MQM-P leader warned that if right decisions were not taken, the responsibility of economic instability would be on the people in power.

The governor also revealed that he spoke to Bilawal Bhutto and Asif Ali Zardari over the issue of delimitations and warned that maintaining the current delimitations would be an injustice to the people of the city.

A day earlier, Mr Tessori, while stressing the need for consensus, said consensus instead of hypocrisy was the most important requirement of the time and that all political parties should work together for the betterment of the country.

Saying that the MQM-P had informed Prime Minister Shehbaz Sharif about its concerns, he added that the premier assured that talks would be held with Asif Ali Zardari and Foreign Minister Bilawal Bhutto-Zardari over the MQM-P’s concerns.

Mr Tessori said, “The meetings were held with Punjab Governor Balighur Rehman and Chief Minister Parvez Elahi. I have prayed for Karachi and also for Lahore.”