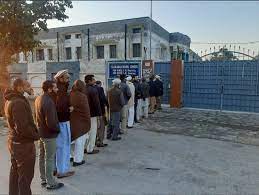 ISLAMABAD: The number of voters were waiting outside different polling stations of Federal Capital to cast their vote in the Islamabad local government (LG) elections. However, the staff of Election Commission of Pakistan has been disappeared.

Islamabad high court (IHC) ordered to hold local government (LG) elections in the federal capital on December 31. As per details, the 101 polling stations assigned by the election commission of Pakistan (ECP) were still closed despite IHC orders. A large number of voters have gathered outside different polling stations in the federal capital as the polling was scheduled to begin at 8 am on Saturday.

Though ECP is not holding LG elections in federal capital today as directed by IHC, but the Pakistan Tehreek-e-Insaf polling agents and the voters are still flocking to the polling stations to cast their votes.

Earlier in the day, ECP and the federal government have filed intra-court appeals against IHC order to hold Islamabad LG polls today. IHC ordered to hold LG elections in the federal capital on December 31. Munawar Iqbal Duggal, the additional attorney-general, confirming the move said the ECP is going to file an intra-court appeal against the decision.

ECP held an emergency meeting after the IHC’s orders and decided to file an intra-court appeal against the court’s verdict. The election commission decided to seek at least a week to conduct the polls stating it requires time for the printing and delivery of ballot papers, the sources said.

ECP officials also held a meeting with Duggal over the inability to conduct the polls. Chief Election Commissioner Sikander Raja also reached Islamabad and held a meeting on the situation.

Sources said more than 14,000 members of the polling staff were teachers and employees of other departments and they were on winter vacation, hence making it difficult for the ECP to conduct the election. The delivery of polling materials to the polling station and setting up polling booths is a huge challenge.

The top election body has made the Jamat-e-Islami and the Pakistan Tehreek-e-Insaf (PTI) leaders respondents in the case. However, the IHC registrar office raised an objection to the ECP appeal, saying that relevant documents need to be attached with it.

The lawyer of the ECP has re-submitted the petition after removing the objections raised by the registrar office.

The Pakistan Tehreek-e-Insaf (PTI) on Saturday filed a contempt of court plea against the Election Commission of Pakistan (ECP) and the federal government after the ECP failed to conduct the local government (LG) elections in the capital.

Moreover, PTI chairman and former prime minister Imran Khan criticized ECP for not holding LG polls in Islamabad despite the court’s orders. In his tweet, Imran Khan said by not implementing IHC orders to hold LG elections in Islamabad on Saturday, the ECP has again shown it is ‘B team of imported govt and its backers’.

Although, Interior Minister Rana Sanaullah said the federal government is not in a position to hold local government elections in Islamabad immediately. “We respect the court [Islamabad High Court], but holding the elections is not possible as the arrangements cannot be made in such a short period,” the federal minister told reporters. He added that as many as 1,000 polling stations needed security, election material is still not deployed at the stations and the polling staff will also be needed. “This isn’t possible.”

The minister also added that since the “ground realities” do not permit the government to ensure the polls take place, the centre was going to file an intra-court appeal against the order. “The order was issued in the evening after office hours. How is it possible to make the arrangements for the [elections]? What can be a more strong reason than this,” Sanaullah said when asked about what his hopes were about the petition’s acceptance.

The minister said he was not surprised by the order, but noted that directions should be “implementable” and the latest IHC order will ensure “that the elections do not take place”. Sanaullah said a new schedule should be issued for the polls, and there is no other way to hold the elections as he ruled out assisting the election commission.

“It isn’t possible [to assist] the commission. We cannot provide security in such a short time period for 1,000 polling stations. Islamabad Police are not enough as will need to deploy Rangers and FC will have to be called in,” he added. Sanaullah said he foresees the polls taking place in the next three to four months as the new delimitation will take time.

It is worthy to mention that on Friday, IHC while accepting the petitions of PTI and JI for nullification of ECP’s decision of LG polls’ deferral, directed the electoral body to hold the elections as per the schedule. On December 27, ECP had cancelled the December 31 schedule to hold the local government elections in the federal capital after a change in the union councils of the capital territory.